Cannes Red Carpet – The Most Glamorous Events of the Festival ’15 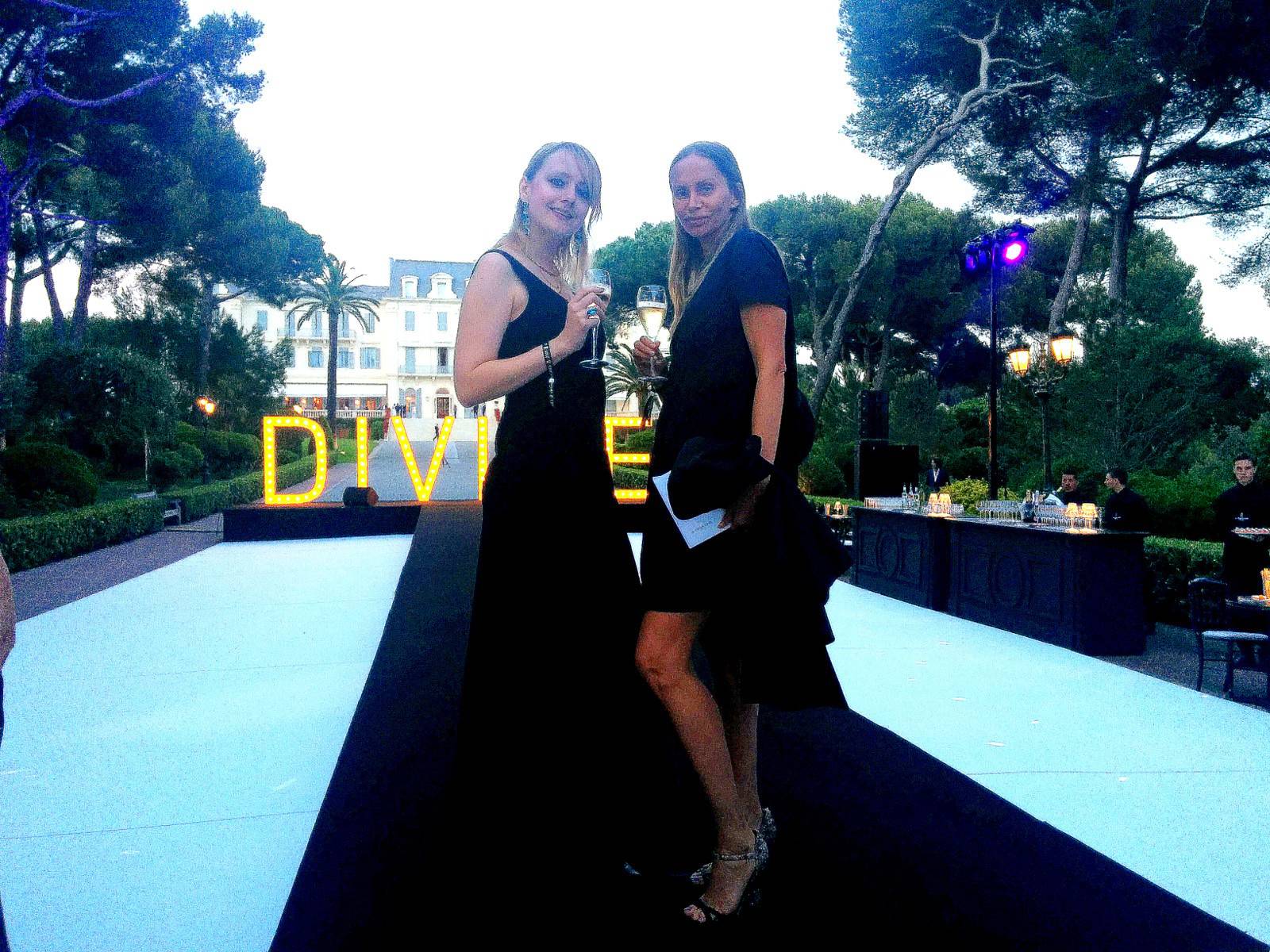 Some of the most glamorous events in the World take place in Cannes during the the film festival. Many people including, Hollywood actors, supermodels, billionaires, musicians from all over the World come to Cannes during this period to attend these beautiful events. In Cannes one has many options to choose from on any nights as there are so many parties. Cannes Red Carpet

Every night there is a movie premier party after the main movie is screened in the evening. These are usually glamorous parties, where the cast of the movie celebrate the success of the movie. This year, I attended the after party of the Le Petit Prince, which was organized in a big tent by the old port. Cannes Red Carpet 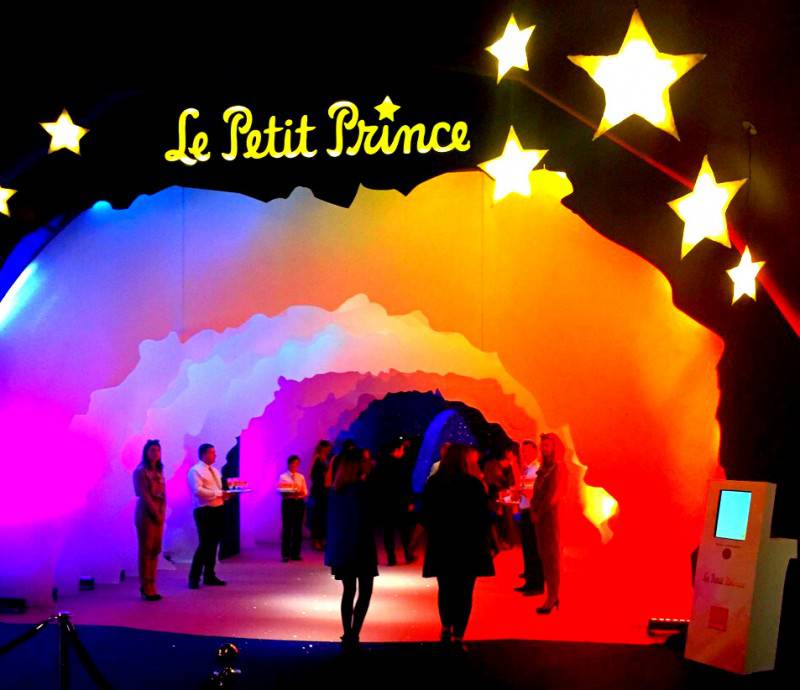 It was a beautiful cocktail party, where the whole staff was wearing the pilot uniform from the movie. At another party we ran into Jake Gyllenhall and Sienna Miller.

Industry parties are also very common in Cannes. This year, I attended a German film industry party, as well as a Polish Film Party organized by Variety Magazine. In prior years, I have also been to the parties of the Italian and Belgian Film Industries. These parties are usually more casual events, where people get together for drinks and mingle. These are not pretentious parties, people are usually not dressed up. It is a great opportunity for people in the industry to network with each other. 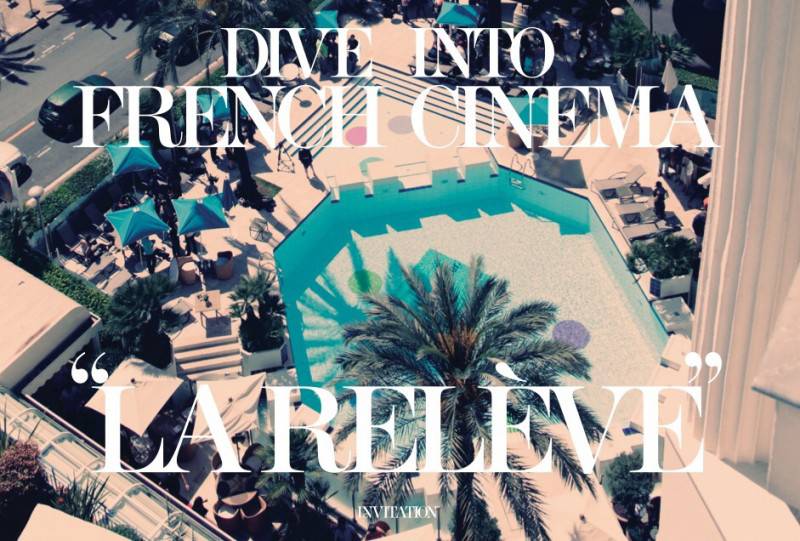 Yacht parties are some of the most exclusive and chicest parties in Cannes. Some of the biggest and most beautiful yachts in the World arrive to Cannes every year for the film festival and many of these host exclusive parties with topmodels and celebrities. This year Paul Allen threw an amazing Bollywood party on his $150M yacht called the Octopus with celebrities like Antonio Banderas, Leo DiCaprio, Ethan Coen. In prior years, I have been to yacht parties of mega-yachts of Roberto Cavalli, socialite Dennis Rich. These yacht parties are always some of the most exclusive parties in Cannes, with many paparazzi hanging outside of the yachts to take photos of the celebrities. I have met Eva Longoria on Dennis Rich’s boat a couple of years ago. Last year Kyle Minogue, Heidi Klum, Adriana Lima, John Travolta all showed up on Roberto Cavalli’s boat for a luxurious champagne fueled party. There were so many paparazzi outside of the boat that one had to literally fight her way through the crowd to be able to step on the shore.

The three most glamorous events of the Film Festival are the two jewellery parties organized by Chopard and de Grisogono and the amfAR Gala.

Chopard organized a Gold party in a huge tent at Baoli Beach.

Gold Party of Chopard in Cannes

Chopard is famous for organizing its annual party at some of the most incredible venues in Cannes every year. Last year the party was at an airport hangar and the DJ was operating out of the pilot cabin of an old airplane. 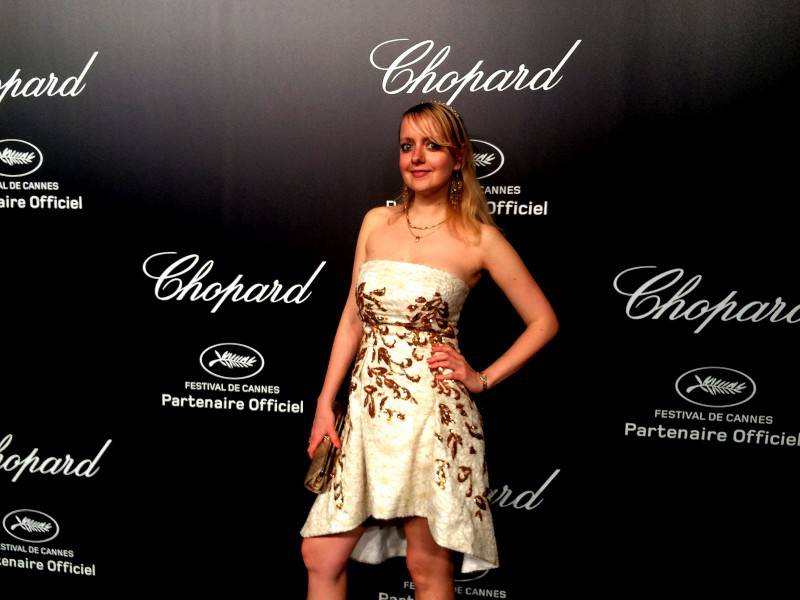 This year everything inside the party was gold. Dinner was followed by a concert by the beautiful Kirsty Bertarelli and then Robbie Williams. This was the best concert I have ever seen. Many topmodels showed up this year at this fabulous event such as Adriana Lima, Izabel Goulart, Isabeli Fontana. The party was absolutely glamorous with many of the attendees wearing gold. It was by far the best party of the film festival in 2015 thanks to Robbie Williams. 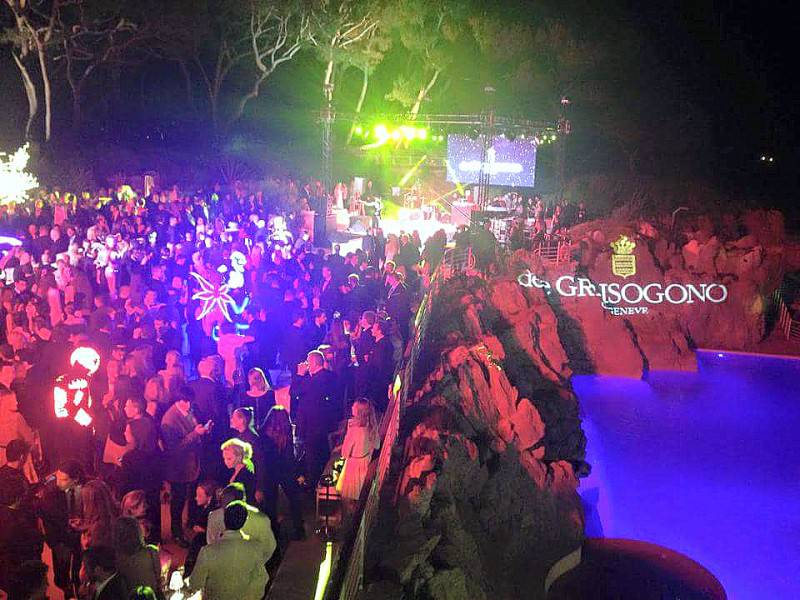 The party was  incredible. The guests could observe some of the most incredible pieces of jewellery in the garden of the hotel. As the guests were arriving one could see some of the most beautiful topmodels and celebrities as well as some of the wealthiest people in the World. Antonio Banderas also appeared with his new girlfriend, Natalie Portman also showed up with her husband. There was a light show and a fashion show in the garden of the hotel before dinner. After dinner, I ran into Paris. 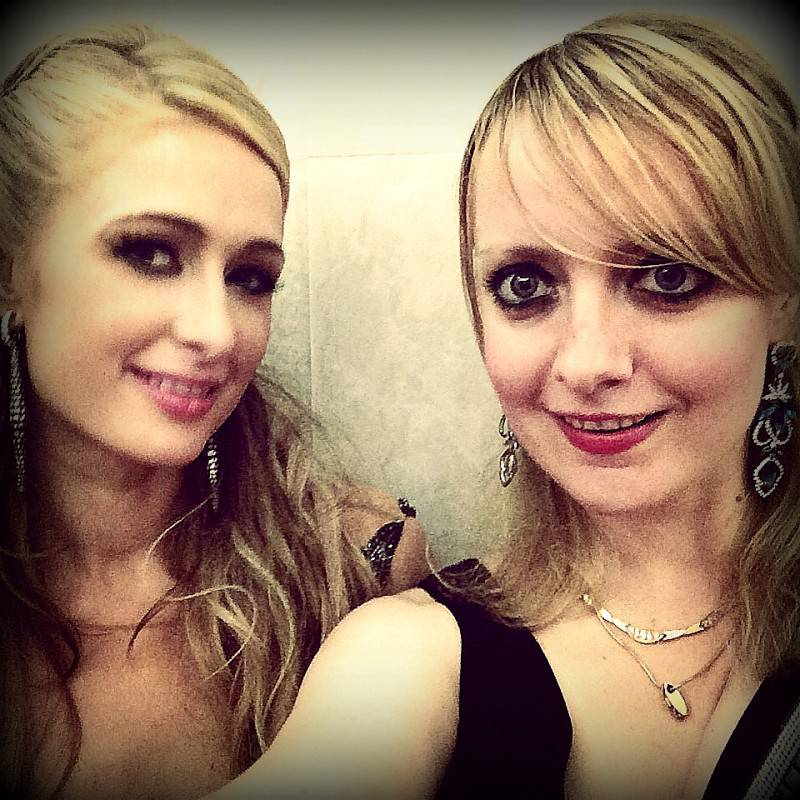 The after party was on the terrace of the hotel. Robin Thick performed. Honestly, his performance was not comparable to the performance of Robbie Williams the night before. In a quiet corner, I even met Benicio del Toro. 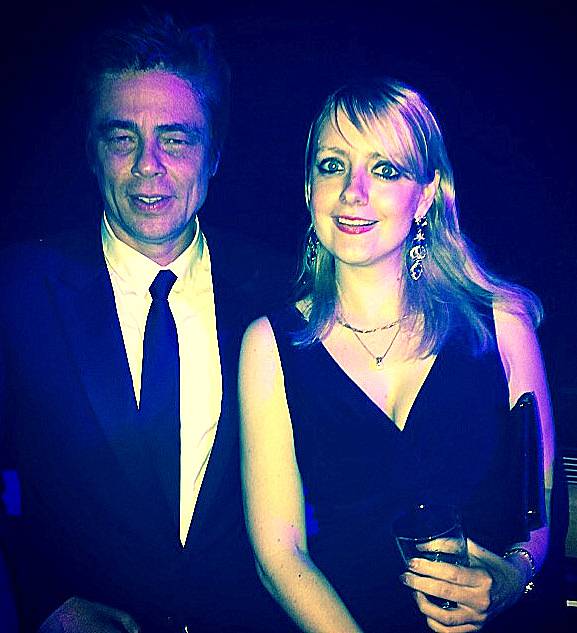 It seemed like he was trying to hide from the crowd, but some of us still found him and managed to take a photo with him. Overall it was a beautiful party and a very memorable night. 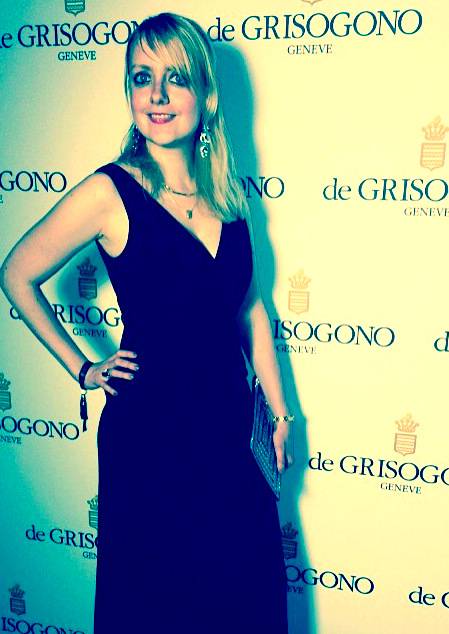 amfAR Gala is one of the most expensive and most incredible charity events in the World. This event takes place in the garden of the Hotel du Cap in Eden Rock in Antibes and hosts the most Hollywood stars and millionaires. 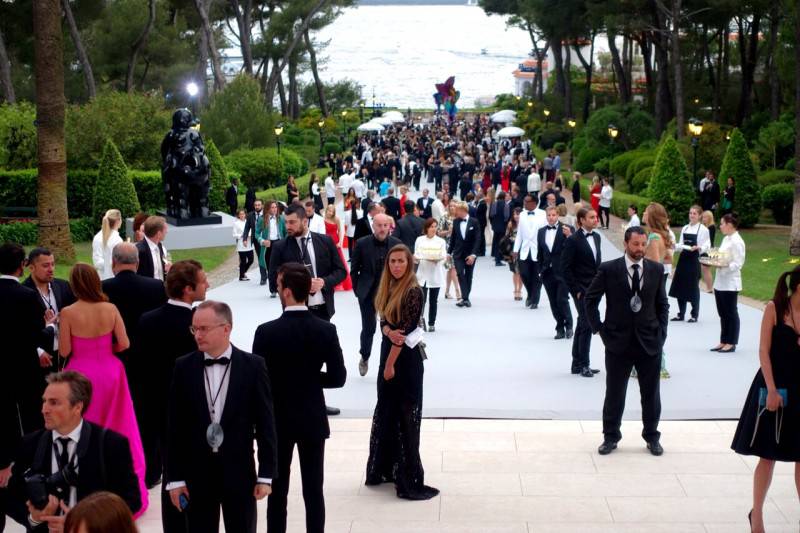 Harvey Weinstein is also amongst the regular attendees. Adrian Brody, Banderas, John Reilly were all at the event this year. Last year I ran into Bieber, Heidi Klum, Leo DiCaprio, Tarantino at the amfAR. All the supermodels such as Lara Stone, Cara DeLevingne, Karlie Kloss show up at the event for Caroline Roitfeld yearly fashion show. 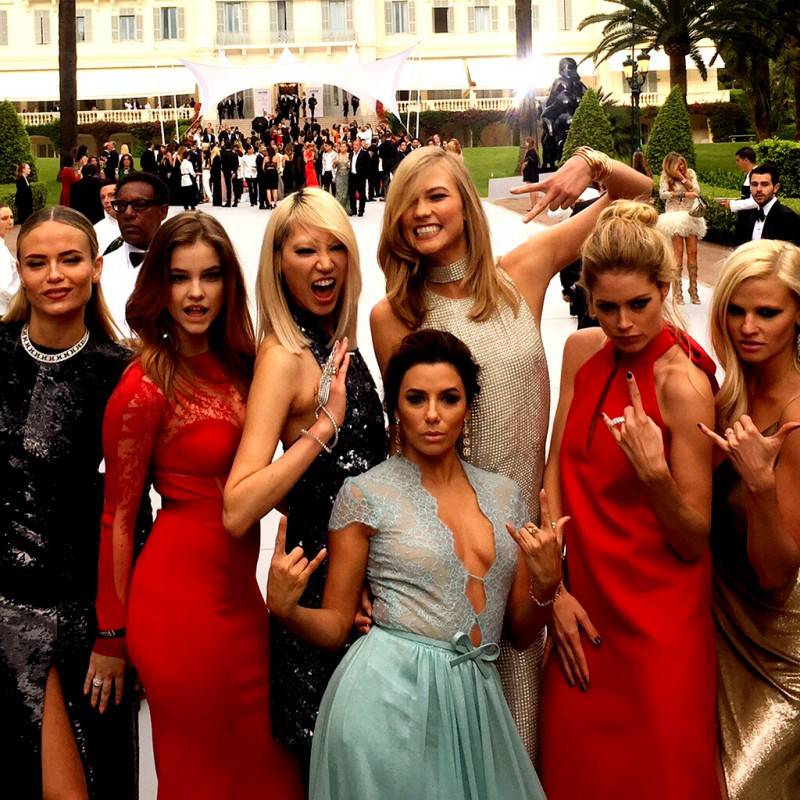 Andrea Boccelli sang during the dinner. Usually Sharon Stone holds the auction. The amfAR gala is a truly memorable night, the kind of event one should attend at least once in a lifetime. 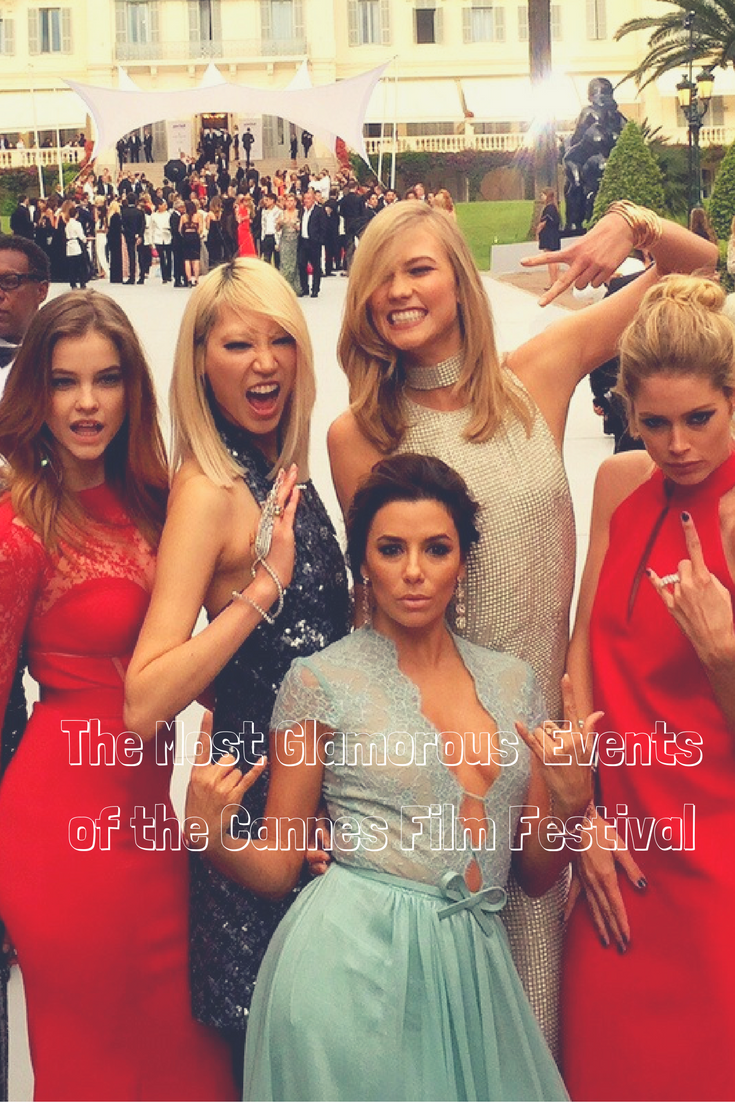