Greek Island Hopping in The Ionian Sea in Sunny Greece 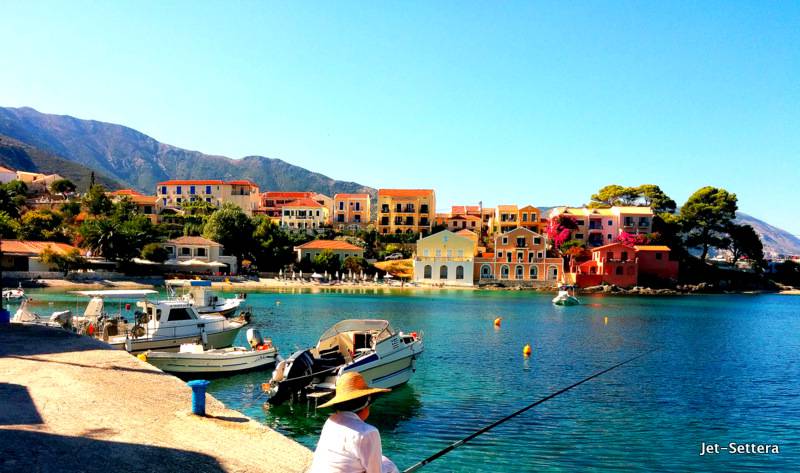 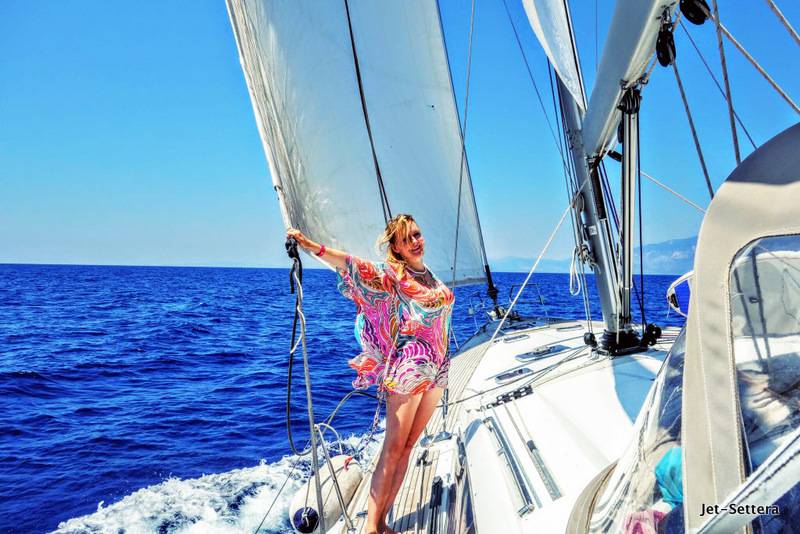 We flew down to one of the smallest airports I have ever seen in Preveza, Greece, not knowing that the 10 of us was up for one of the most memorable adventures of our lives. We boarded the boat in Sivota and off we went discovering some of the most incredibly beautiful places on the Ionian Islands. Greek islands hopping in the Ionian Sea in Greece is a very special experience. You can see many beautiful landscapes and stunning islands, meet friendly locals and taste delicious Greek dishes.

Read about the island of Corfu here.

On the first day, we arrived to a bay, the water was crystal clear, the rocks were white. It was calm and quiet. There were a few sailing boats around us. We swam in the crystal clear water, took out the paddle boards and paddled around. In the afternoon we turned the boards into waterskis. It was amazing fun! In the evening we hit a nearby fishing village for dinner. The town had about 20 houses, a few restaurants and one supermarket. The restaurants were family ran, serving local dishes at fairly reasonable rates. The ten of us slowly turned into a family while we were spending 24 hours a day together. It was an amazing experience and the Greek islands were absolutely beautiful! 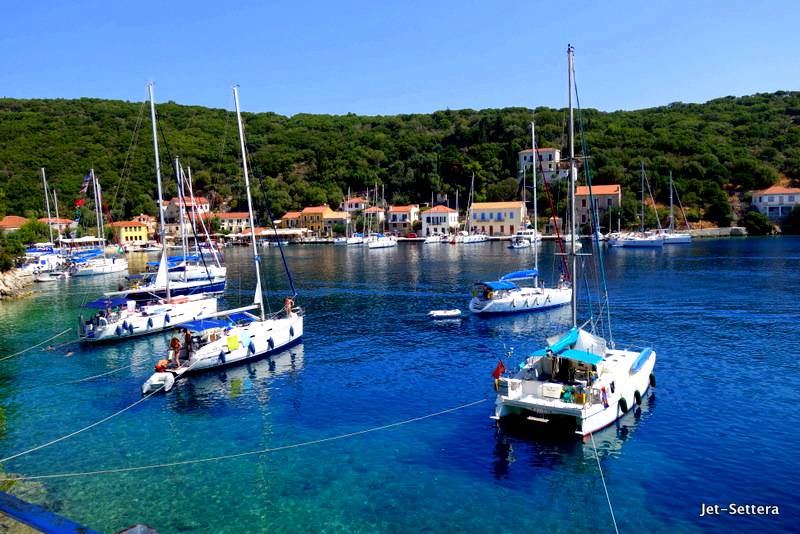 Zakhyntos, My Favorite of the Ionian Islands

It took us hours to reach Zakhyntos on the sailboat. The scenery was all worth it though. We docked the boat in a bay and swam to the shore, where there was a giant shipwreck. Took photos from every direction and swam back to the boat as it was getting dark.

Read about what it is like to be visiting Zakhyntos with a family. 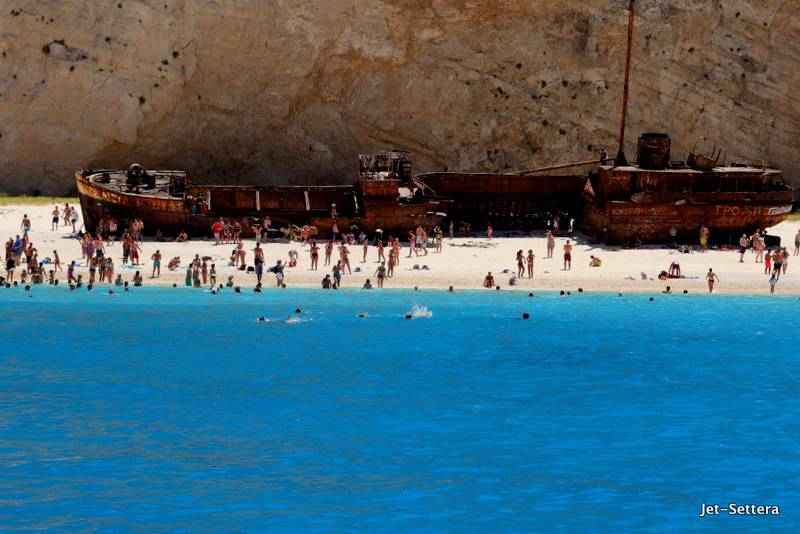 We spent a night in the bay on the boat. It was amazing to stay out on the open water. It was only us and another boat in the bay. We cooked on the boat and ate dinner on the deck. While we were eating, we heard people screaming from the other boat and saw the large boat was moving towards us. Suddenly everyone stopped eating and we started to panic. Our guys jumped up from the dinner table and moved the boat out of the direction of the other boat as quickly as they could. People were screaming on the other boat in Greek. We could not understand them. In the end it was all sorted and the boats did not collide. We finished dinner that night, had a couple of drinks and slept in the wide open water. I could feel the boat moving underneath me as I was falling asleep. The captain stayed up all night to watch the sea. He said it was not safe to leave the boat floating on the open water.

By the time we woke up the next morning, the bay was full of tourist boats. People would come out from the nearby town to see the wreck for a day. There were at least a dozen boats and hundreds of people in the water. It was sunny and the water was crystal clear. We swam to the nearby caves to see what they are like inside and then we headed back to the boat and took off for our next destination. It was a beautiful day on the boat, the scenery was incredible. 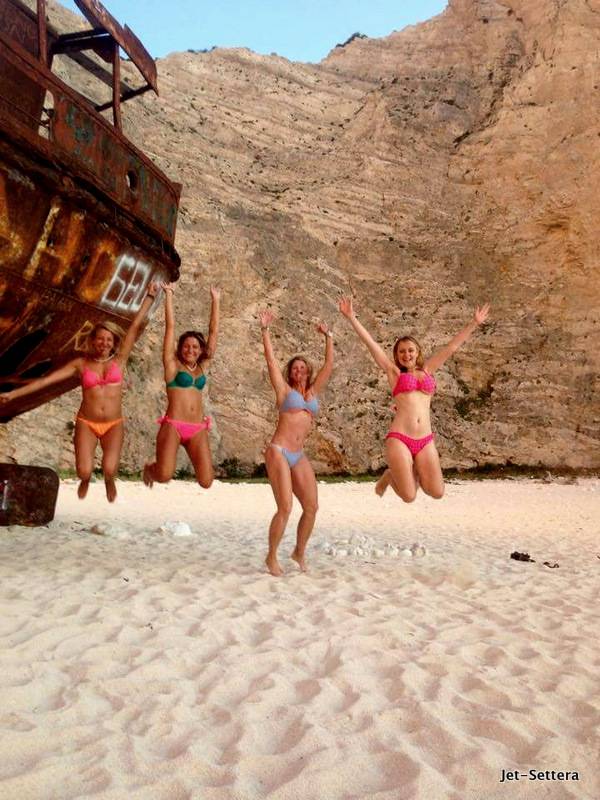 Girls having fun on Zakhyntos Island

We reached the biggest city on our trip. The port had about two dozen boats of all the different sizes. We made friends with a group of American guys. They were young, loud and boozed up. In Kefalonia, we stocked our boat with local rose wine and other fancy goods that we were not able to get in other small villages. We went to the main square for dinner and we ended up at some bar. The city was not particularly pretty. Also did not have the kind of cozy atmosphere like the other fishing villages did. So we sailed on the next morning. We saw the boat of the Americans in the open water. 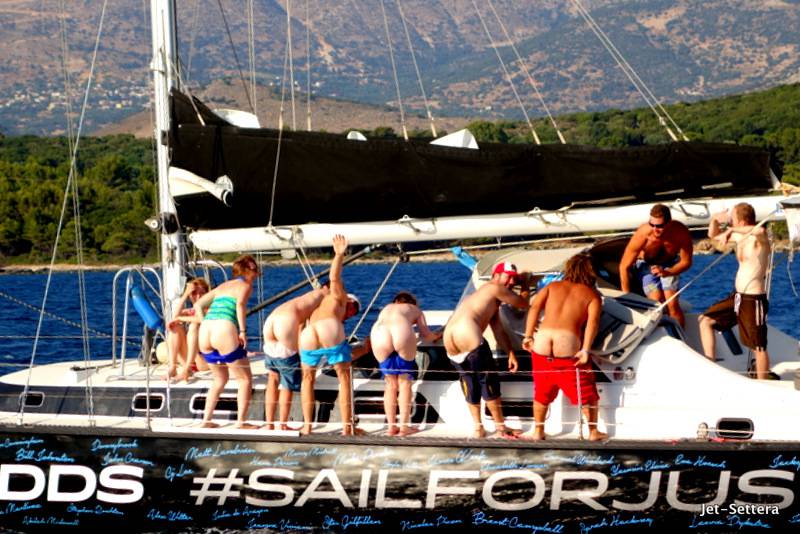 Party between the Ionian Islands, with the Americans

We docked our boat next to them. Many of them were swimming naked. Some of our girls got topless. The music was blasting. They were finishing one whisky bottle after the other. Some were dancing on the top of the table naked. Everyone was having a blast. The party lasted for about an hour, when everyone was drunk and most of the alcohol was finished. It was the kind of party, we will all remember for a while.

Mirtos was a small and very beautiful island. The water was crystal clear, the sand was white.  It felt like we were in the Caribbean. This bay can only be reached by boat, so the place was deserted. We felt like it was our little private beach. It was beautiful. After a couple of hours of swimming we got back on the boat to reach the nearby fishing village called Assos. 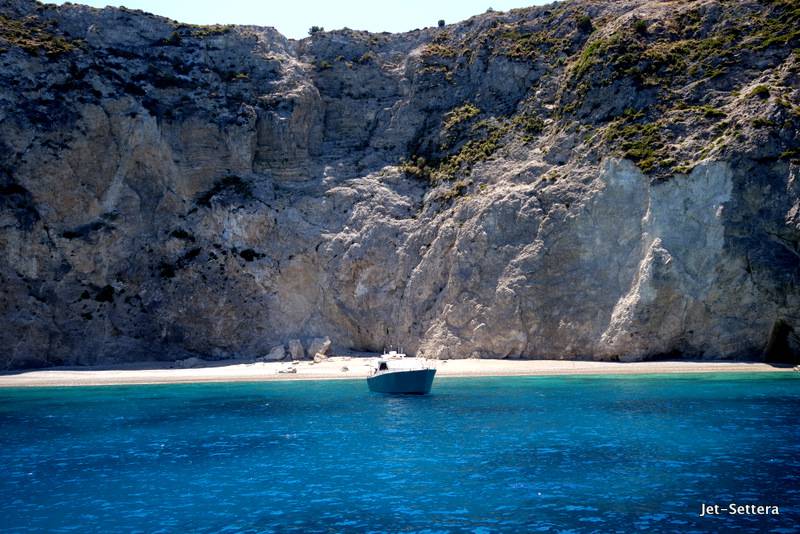 Assos was the most picturesque place I have seen this whole Summer. It was a spectacular little village with colorful houses on the mountain. The water was clear, the scenery was beautiful. We ate at a wonderful local restaurant. It was always the usual homemade Greek food. We sat at a bar on the beach until late at night, drinking ouzo and other local drinks. It was peaceful and quiet and so beautiful. 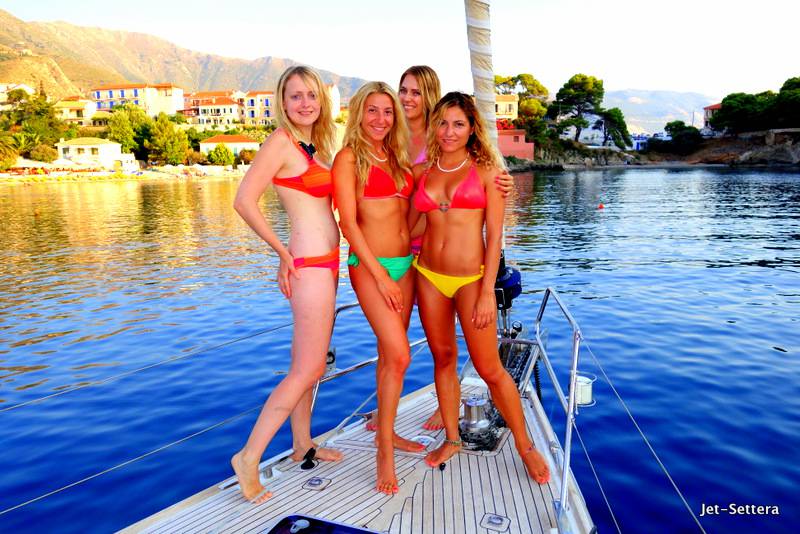 Landing in Assos in the Ionian Islands, with the Girls

Fiskardo was our next destination. It was quiet a large city with lots of nice touristy shops. We had dinner at a very nice restaurant. It was the fanciest meal we had on our whole trip. We did some shopping in the local stores. They sold interesting local goods. We made some new friends on the shore. It was a very vibrant village with nice bars and nightlife. We lost a couple of drunk people from our team who had to swim back to the boat, but that was part of the fun in the end. 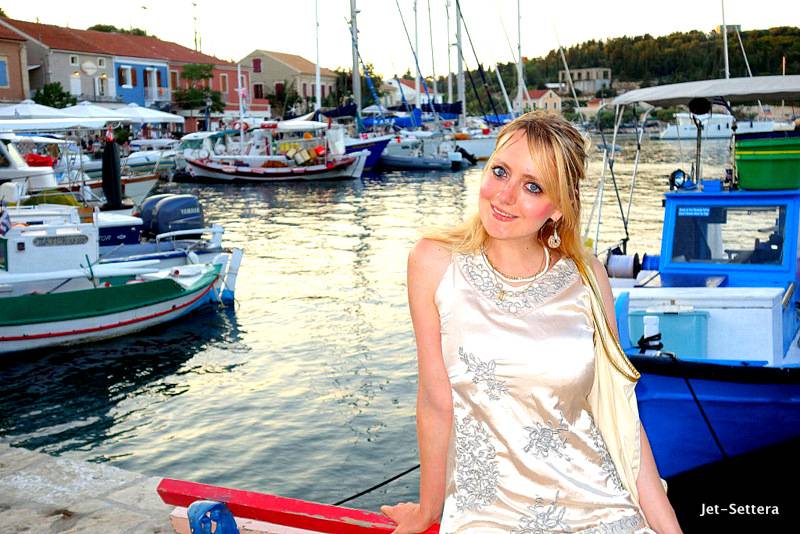 Our last stop was in the island called Vassiliki. We were all very sad to leave the boat. One week flew by so quickly. We all agreed that we saw some of the most amazing scenery and beaches around the Ionian coast. We arrived to our last fishing village that looked pretty touristy. We enjoyed our last Greek dinner together in a local restaurant. We were all very sad to leave each other and our pirate life. We picked up some souvenirs in the stores and took off for Preveza airport the next day. Preveza is one of the most interesting airports I have ever seen in Europe. There is no passport control anywhere, there are no signs. You don’t really know where and when your flight leaves from. It was like being in a third World country to be honest. Anyway, we enjoyed our amazing week in Greece and we accepted all the circumstances. It was an incredible trip. 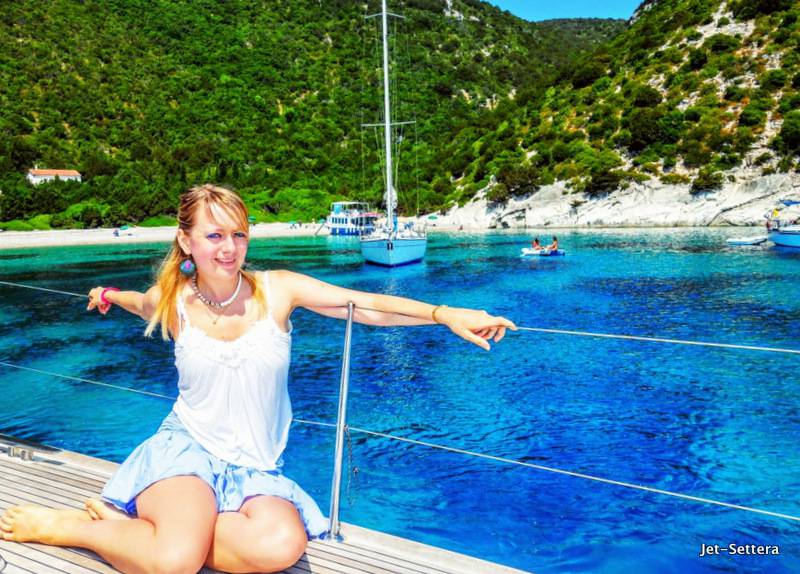 What’s your favorite Greek Island? Leave a comment below! 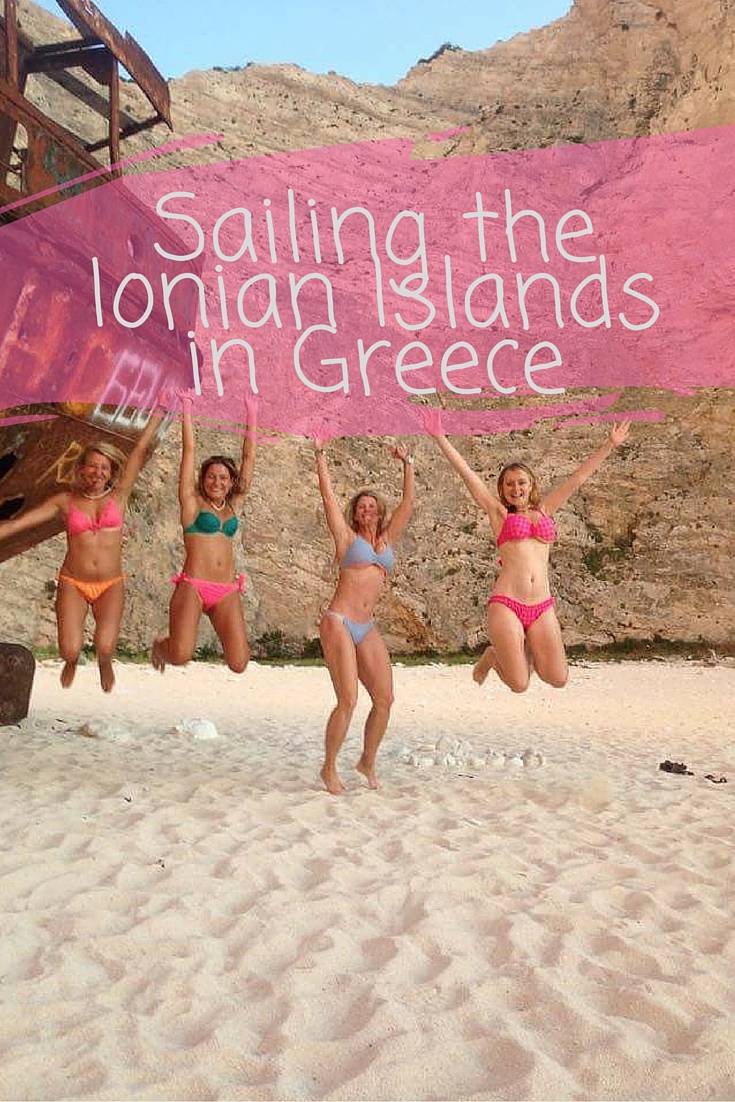 Sailing the Ionian Islands in Greece