Basquiat and Jeff Koons at The Guggenheim in Bilbao, Spain 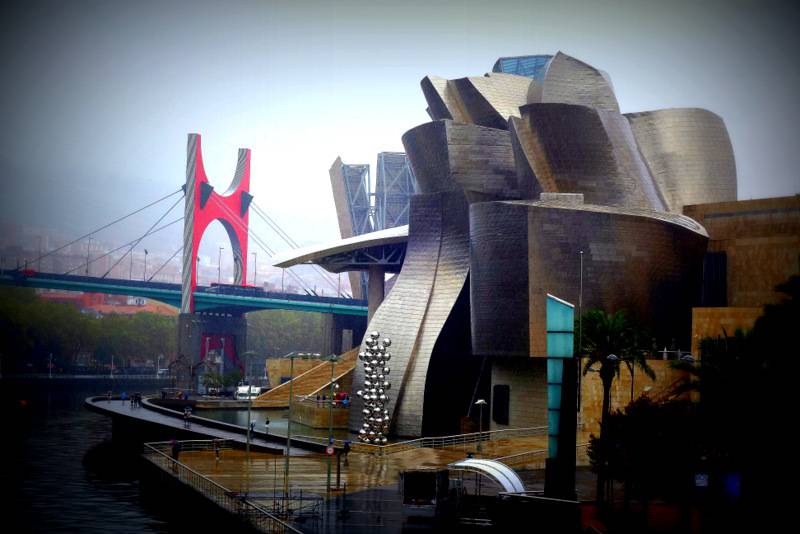 Where is the Guggenheim Museum in Bilbao? It is at Abandoibarra Etorb., 2 and it can easily be reached by tram. This museum in Bilbao is so large, that you can’t miss it.

The Guggenheim Bilbao tickets cost €7,50 for students and seniors and €13 for adults.

The building is situated right on the river and it has one of the weirdest shapes one can imagine. First you may think it’s a giant stadium or something of that sort. The building of the Guggenheim is surrounded by art works such as the metal bouquet by Jeff Koons or the giant spider right behind the museum. 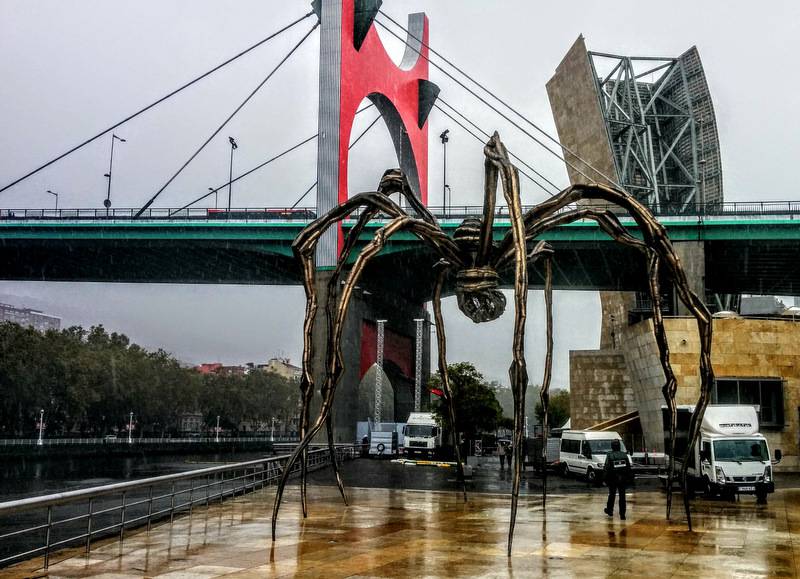 Giant Spider in front of the Guggenheim in Bilbao

At the entrance the famous flower puppy by Jeff Koons greats the visitors. The puppy in this case is an absolute giant. 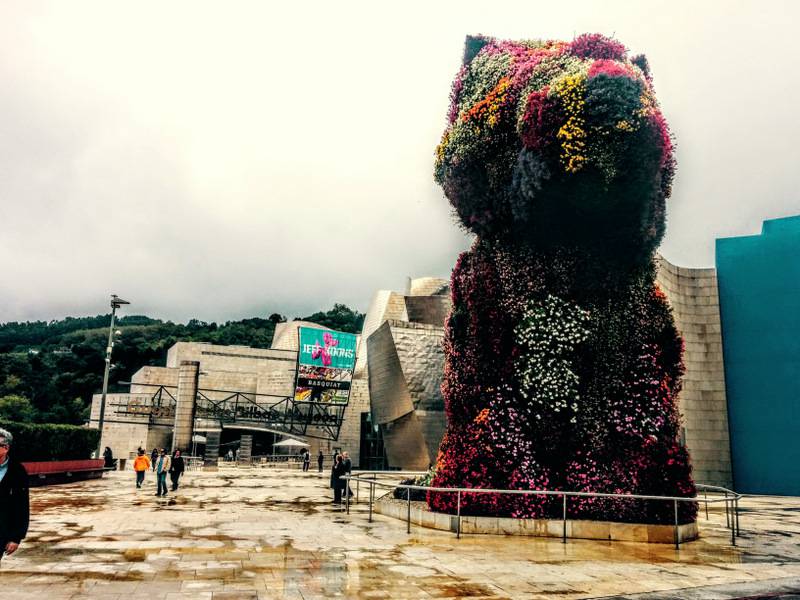 I saw a smaller version of the puppy at the Foundation Beyeler in Basel. The Guggenheim Museum hours are 10 am to 5:45 pm every day.

Who Designed the Guggenheim Museum?

The Guggenheim Museum in Spain was designed by Canadian architect Frank Gehry, who also designed the Foundation Louis Vuitton in Paris. The designer of Spain’s Guggenheim Museum was encouraged to design something innovative and daring. The architect said that the randomness of the curves of the exterior are designed to catch the light. The building is one of the most admired work of modern architecture. It is also one of the largest museums in Spain. The museum was opened in 1997 by Juan Carlos I of Spain.

Inside the museum there is a very large empty hall and one wonders where the art is in the museum. The building itself is a piece of art. In the lobby, there is a maze created by giant wooden pieces. This is the largest and the most interesting Bilbao art museum. 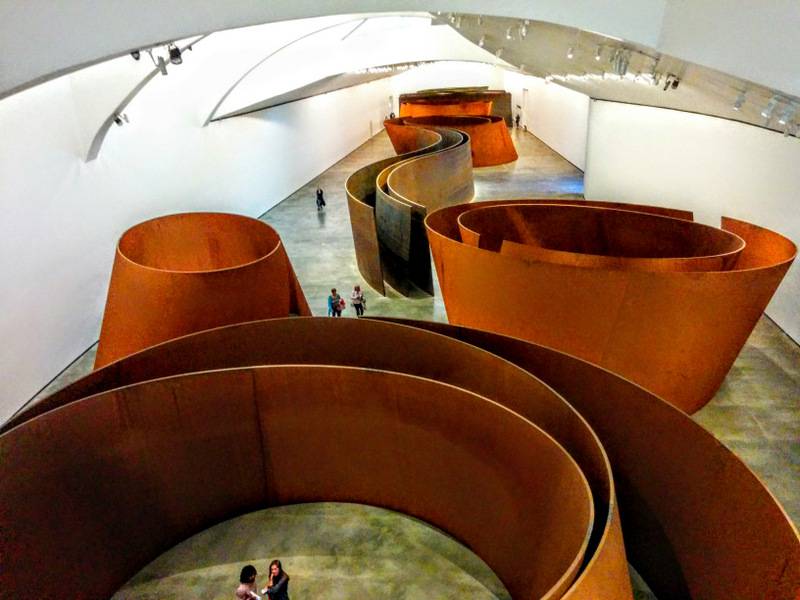 Guggenheim in Bilbao, Spain (Koons, Basquiat at the Guggenheim)

I didn’t really see the point of the whole creation, but art does not always have a point.

Exhibits of the Guggenheim in Bilbao

On the first and second floors I discovered the amazing colorful collections of Jeff Koons and Jean-Micheal Basquiat. Jeff-Koons had very fascinating pieces such as toys made out of colorful metals, or Michael Jackson displayed with his monkey. 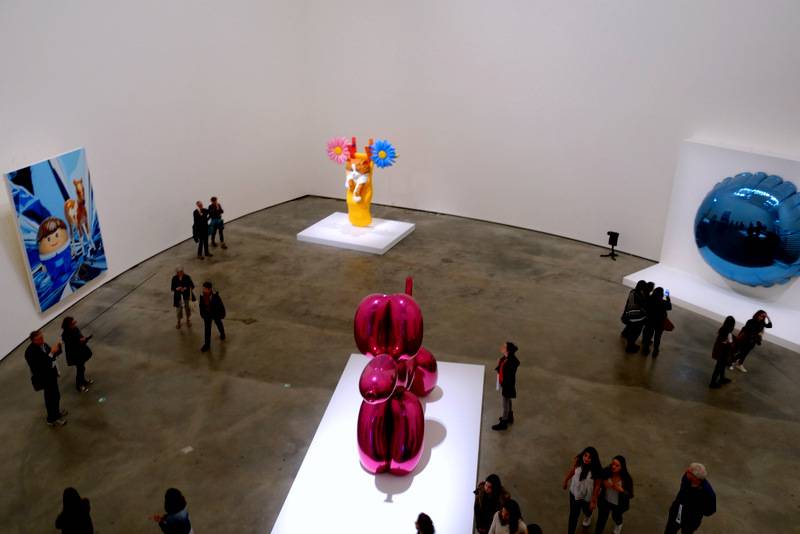 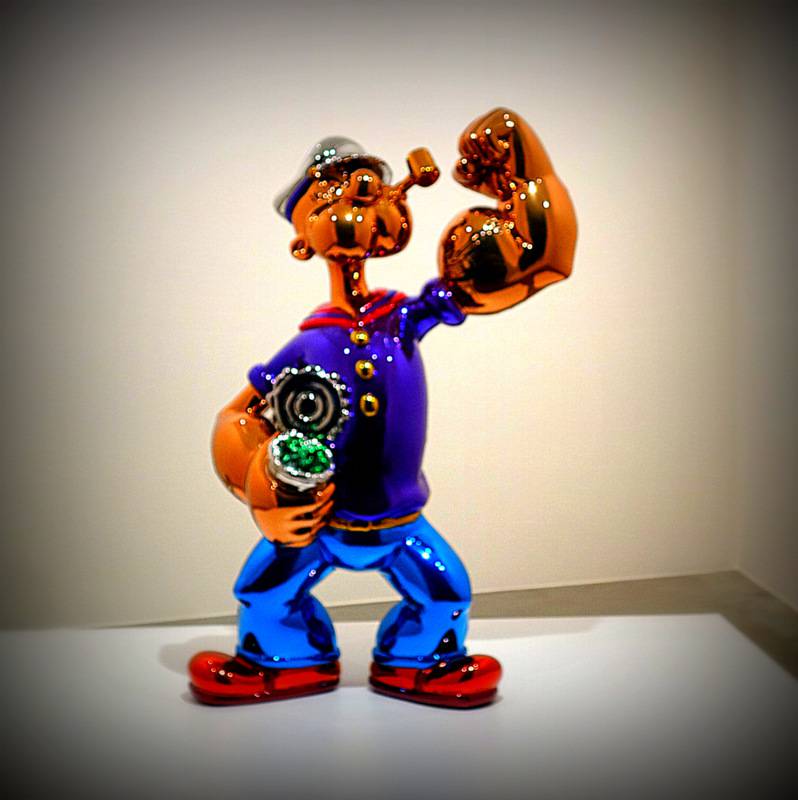 Jeff Koons at Guggenheim in Bilbao (Koons, Basquiat at the Guggenheim)

Jeff Koons at Guggenheim in Bilbao (Koons, Basquiat at the Guggenheim)

The other show that I ran into was the exhibit of African-American pop artist Jean-Michel Basquiat. He died at the age of 28 in drug overdose. The characters of his paintings are always African-Americans and his art work is very characteristic. He often used words and stick figures in his paintings. He is famous for his primitive style and for his collaboration with Warhol. After Warhol’s death, he sank into a depression and took more and more drugs which eventually resulted in his death.

Visiting the Guggenheim Museum in Bilbao, Spain is overall a very interesting experience and it is certainly worth a visit. It s a pity that you cannot really take photos of most of the art, but make sure you take a photo of the flower puppy by the entrance as a memory to take home. The Guggenheim in Bilbao is the kind of museum you will not easily forget. 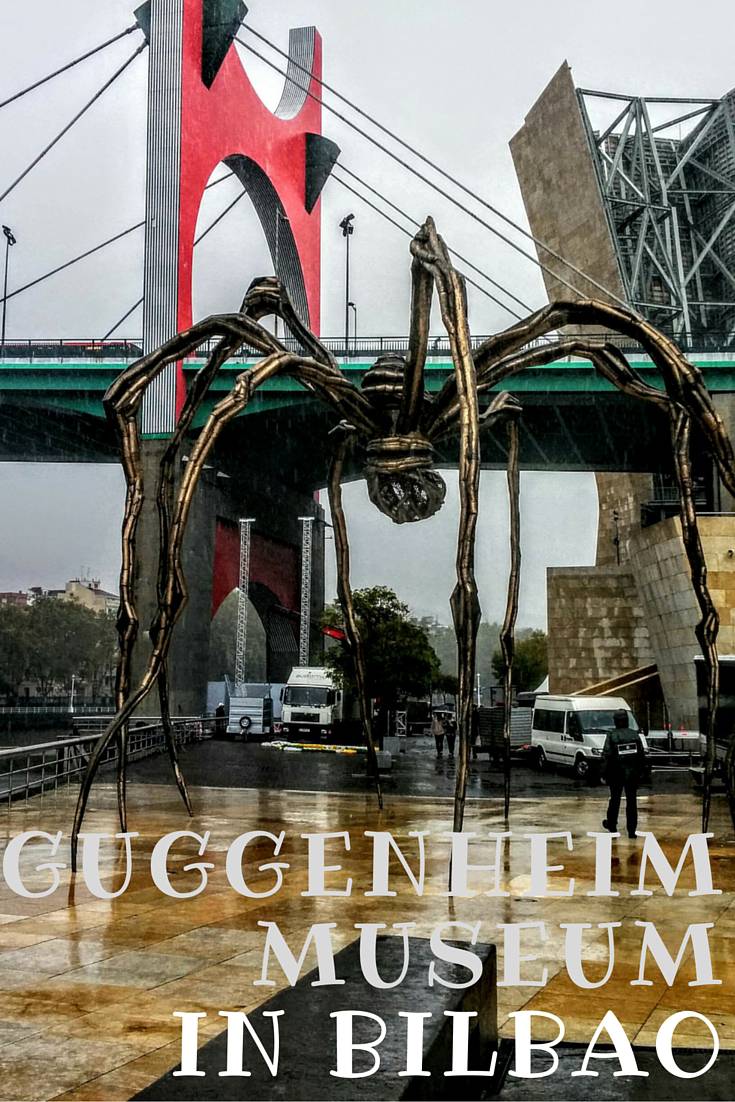 Summary
Article Name
The Guggenheim Museum in Bilbao
Description
The Guggenheim Museum in Bilbao is a very special in the most fascinating building. The museum is surrounded by cool pieces of art, like the flower puppy by Jeff Koons or the giant spider. Inside there is a wooden maze in the lobby and a big Jeff Koons and Jean-Michel Basquiat exhibits on the upper floors.
Author
Barbara Wagner