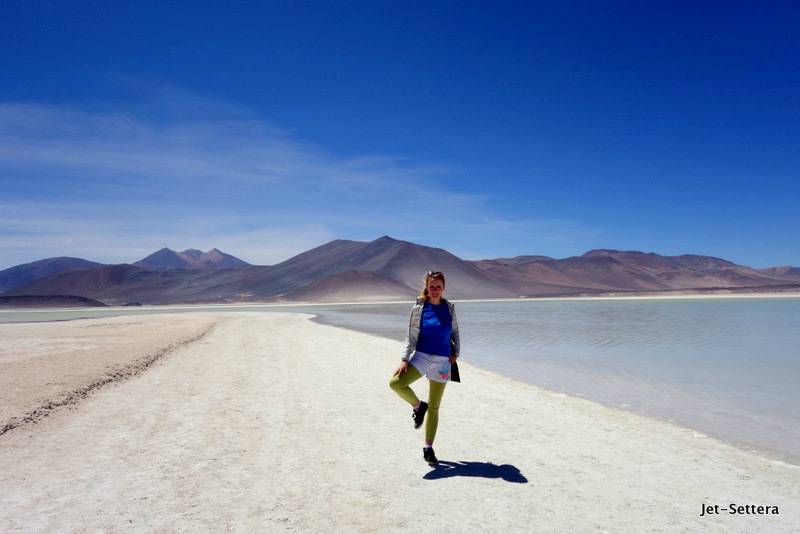 I took a bus from Northern Argentina to San Pedro de Atacama in Northern Chile to explore the famous Atacama Desert. The bus departed from Salta, Argentina at around 2am and I fell asleep right away. At about 9am, I woke up from my deepest dreams, because someone was shouting at me: “Passport Control”. I crawled down the bus half asleep to stand in line for customs. First, I stood in line at the Argentinian customs, then at the Chilean customs then I had to stand in line to have my luggage X-rayed. The whole thing took about an hour and a half. I was so sleepy. Finally I could return back to the bus and sleep another 2 hours, when we arrived to the middle of the desert in San Pedro de Atacama. This town was amazing! Majority of the people were tourists and there was a travel agency or a hostel on every block. It was a hippy town, with lots of young people. I loved the atmosphere. After settling into my accommodation, I reserved all my tours for the next two days. I collaborated with Desert Adventures, because I heard they had a wide variety of tours and experienced multi-lingual tour guides. They are located in San Pedro de Atacama, on the corner of Caracoles and Tocopilla. I was not disappointed by them for a second. They offer some of the best San Pedro de Atacama tours to explore the near by sites.

The Three Most Amazing Sites of the Atacama Desert

The first tour I participated in was a full-day tour that took me to the Red Rocks (Pierdas Rojas). We started out very early in the morning at about 6:30am visiting the Antiplanic Lagoons, Lagoon Miscanti and Lagoon Miniques. These lagoons were really colorful and the surrounding mountains were reflected in them. The driver set up for breakfast on the rocks and we sat down and had breakfast in the middle of nature, admiring the view and the animals surrounding us. 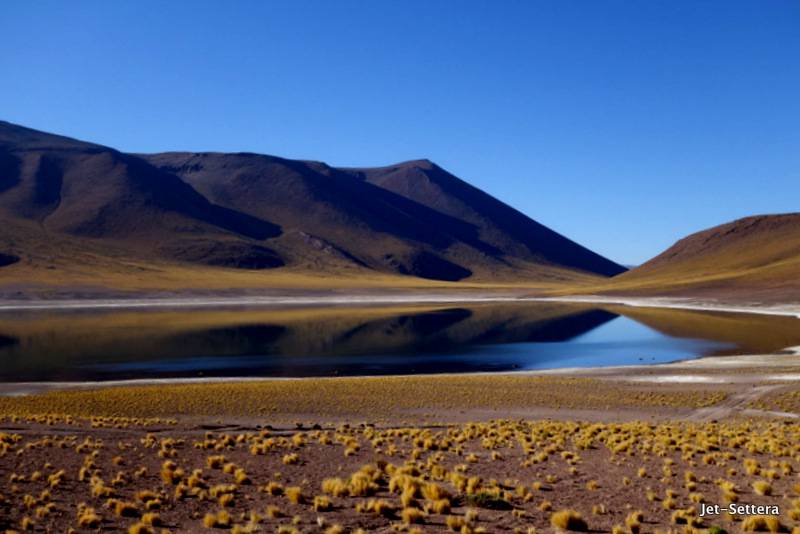 The next stop was at the Red Rocks. They were absolutely incredible. The ground was covered with large red rocks, the mountains were colorful and the lagoon was white. The colors were picturesque. It was very similar to the desert in Southern Bolivia. I took some beautiful photos here. I loved the scenery. 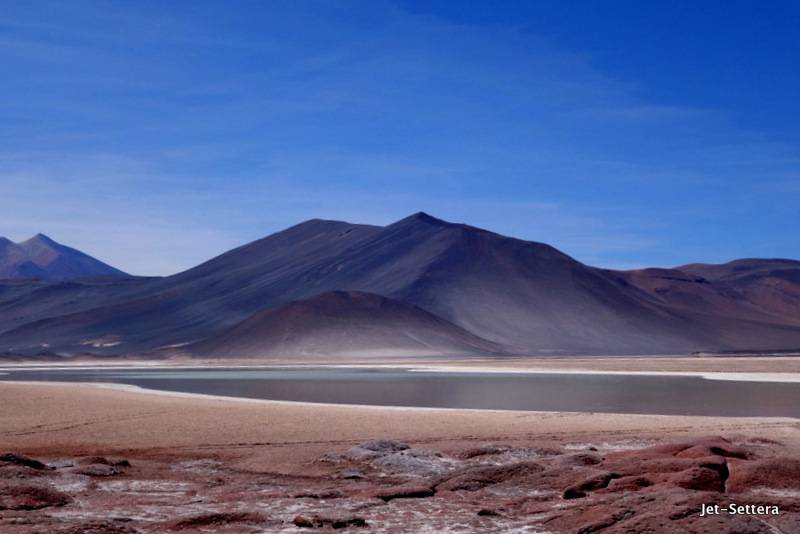 The next stop was at a tiny village called Socaire, where we had lunch in a local restaurant. The food was home cooked and authentic. It was the right thing to do to sit in a restaurant at this hour, as it was way too hot to be outside around midday. After lunch we visited the local village and the church. It was sizzling hot. Next stop was at the flamenco reservation. We were in the middle of the salt flats where the flamencos lived. Our guide gave a quick background about all the different kind of flamencos that lived all over the World. Apparently, flamencos have been around longer than the dinosaurus. 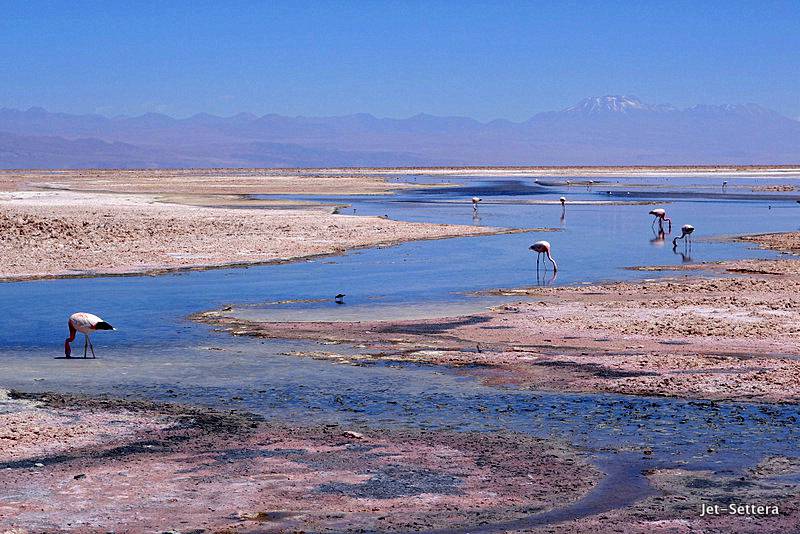 I took a couple of photos of them. It was incredibly hot, so I couldnt stay outside very long. The last stop of the tour was in Toconao, where we visited the local church, made out of of cactus tree and then we visited a lama. The guide told us how the lama was raised and displayed the kind of products and cloths they made out of its fur. We arrived back to town around 5pm in the afternoon.

The next morning we set out around 4:45am to visit the third largest geyser in the World. The bus drove us up to 4320m altitude. It took us around 1,5 hour to arrive to the National Park of the Tatio Geyser. We watched the sun rising, while we walked around the 50 geysers. 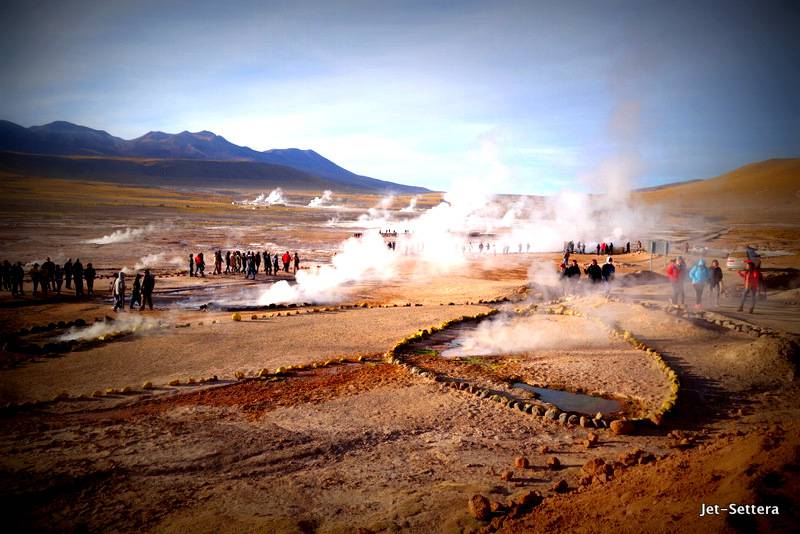 They were all smoking in the dark, some of them occasionally split up like a small volcano. As we walked around, the guide told us about the history of the geyser and explained how it changed over the years.

After we walked around the geysers, we had breakfast in the open air. Later, we were allowed to take a bath in the largest geyser. I did not try it, as it was cold outside, but the water was very hot. I walked around the geysers and took photos of it instead. On the way back we stopped by a valley to see the lamas, then we stopped by a lake to take photos of the flamingos. Later we stopped by the Lake Puttana as well, where our guide told us about the local birds of the region. He also told us that Atacama meant black bird. We saw different kinds of birds and ducks. They were colorful. The last stop of the tour was in the Machuca village. It s a village with about 15 local inhabitants that cater to tourists. We visited the local church. It was beautiful. We also tried the lama meat that they were preparing there. It tasted like beef, but it was softer. It was a beautiful morning visiting the geyser, watching the sunrise, trying lama meat, learning about the local birds. We were back in town by noon, so I had some time to explore San Pedro before taking another tour in the afternoon.

At 4pm in the afternoon, we set out to see the Moon Valley. It was one of the most beautiful places I have ever seen in my life. First stop was at the Cordillera de la Sal (mountain range made out of salt). 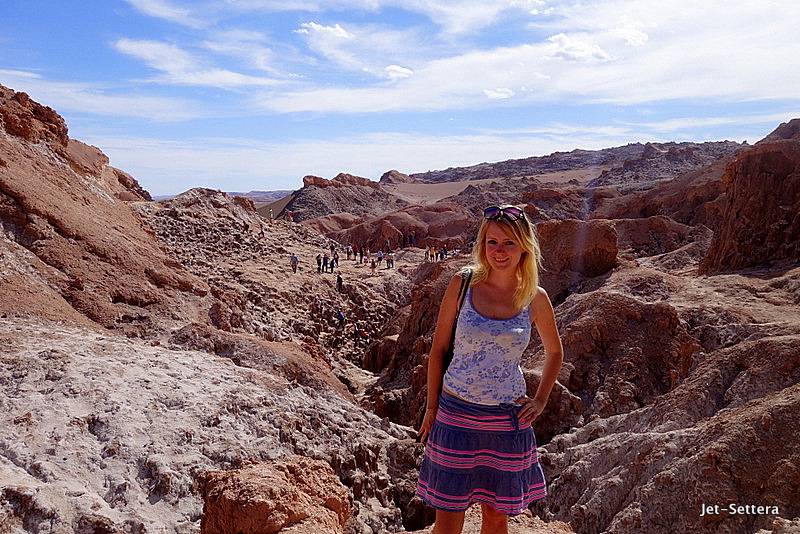 We climbed the caves, sometimes we crawled inside the caves. Sometimes it was pitch black inside and we needed a flashlight to see the holes ahead of us. After crawling for about 5-10 minutes, we arrived to the top, where the views were spectacular. The whole mountain range below us were made out of salt. Sometimes, you could see the salt crystals. The view from up there was really nice.
Next stop was at Las Tres Marias (The Three Mary’s) it was a rock formation in the mountains as a result of intense erosion that are composed of gravel, clay, salt, gems, and quartz. The Three Mary’s are estimated to be approximately one million years old. One of the pieces on the side were broken off by a tourist. 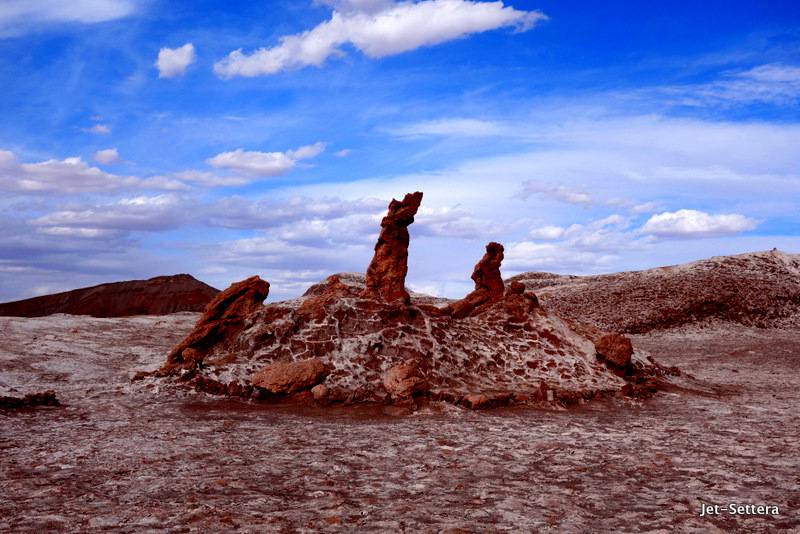 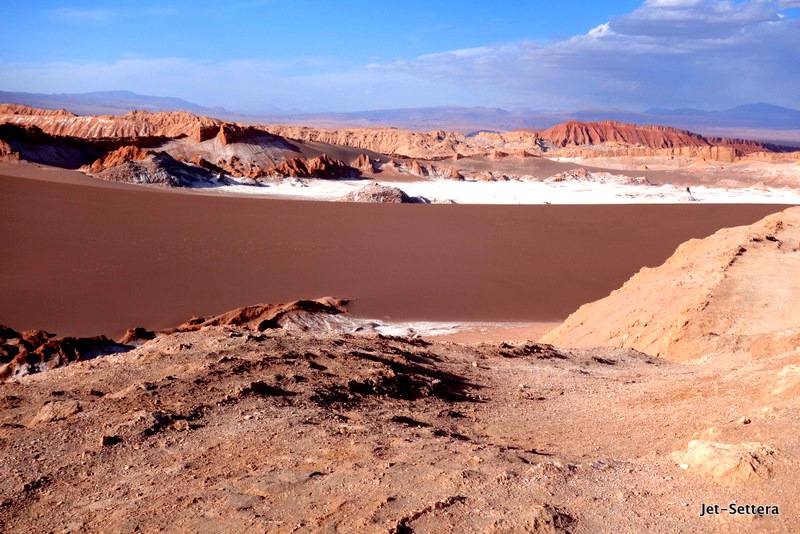 We climbed up to the top of the biggest sand dunes you can ever imagine. This accumulated in the last 1000 years. We hiked with our guide to the tallest point. The view was incredible from the top. It was one of the most beautiful scenery, I have ever seen in my life. From here, we went to the Death Valley. It was huge and incredible. No picture will display the depth and size of this place. We spent the end of the day watching the sunset from the Moon Valley. The sky turned into blue, pink yellow colors. It was truly magnificent. 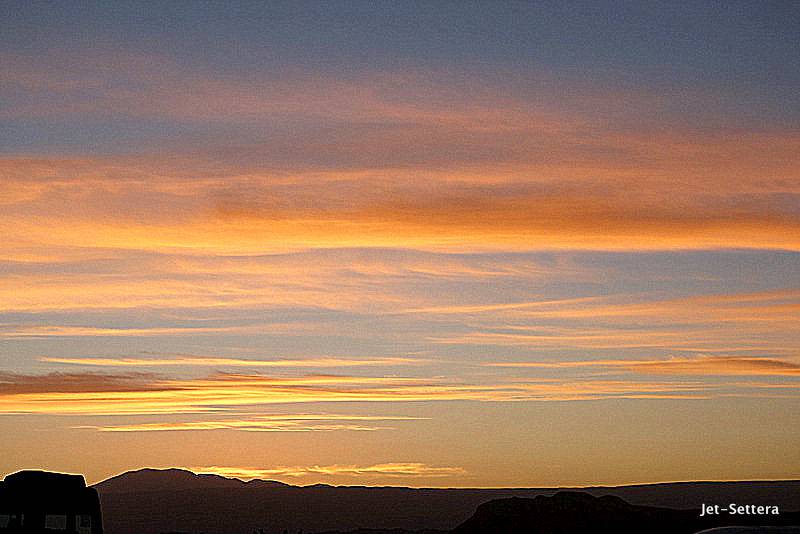 Sunset over the Moon Valley

At night the temperature dropped and I would have liked to listen to the guide talking about the volcano outbreak in the nearby volcano, but it was chilly to stand outside. We got back into town after 9pm. I was in love with the Atacama Desert and Chile after seeing these places. It is one of the most beautiful sites, I had ever seen.

This ice-cream store is on the main street of San Pedro de Atacama. You can find it to the right as you walk towards the bus station. The ice-cream store sells a lot of interesting local flavours such as pisco sour, rica rica, ayrampo (local cactus flower flavours), guayaba with maracuya, as well as lucuma. I enjoyed trying the various local flavours of this place. Every day I kept going back for more. The ice-cream cubes are giant, so make sure not to order more than one or two. It is definitely a must try if you are an ice-cream fan like me. 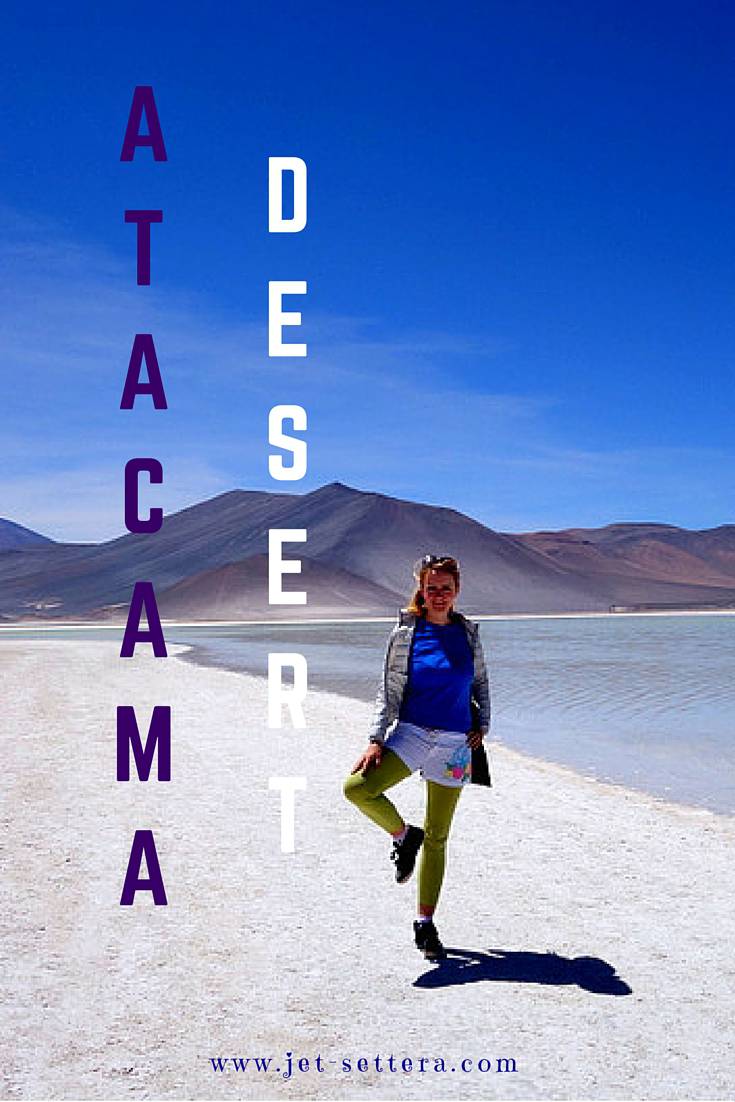