The Best Sicily Tourist Attractions to Visit During the Summer 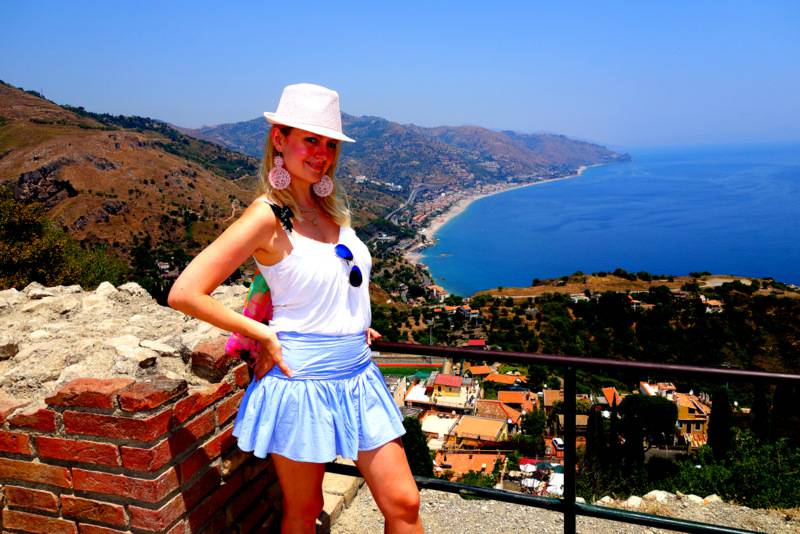 First of all, I love everything about Italy. I think this country is heaven on Earth and I just cant get enough of it. No matter what part of Italy I visit, its architecture, history, people, food, art, beaches, nature, completely blow my mind. Therefore, I suggested Sicily as a destination for our family vacation and I must say it was a really incredible place to visit. Here are some of the best Sicily tourist attractions to visit on a week long beach vacation during the Summer.

The trip started out in Catania on the Eastern coast of Sicily. Catania is one of the largest cities in Sicily. We started out by walking around the Duomo Square and the famous elephant in the middle of the main square. The elephant is the symbol of the city and it has been around since the 17th century. 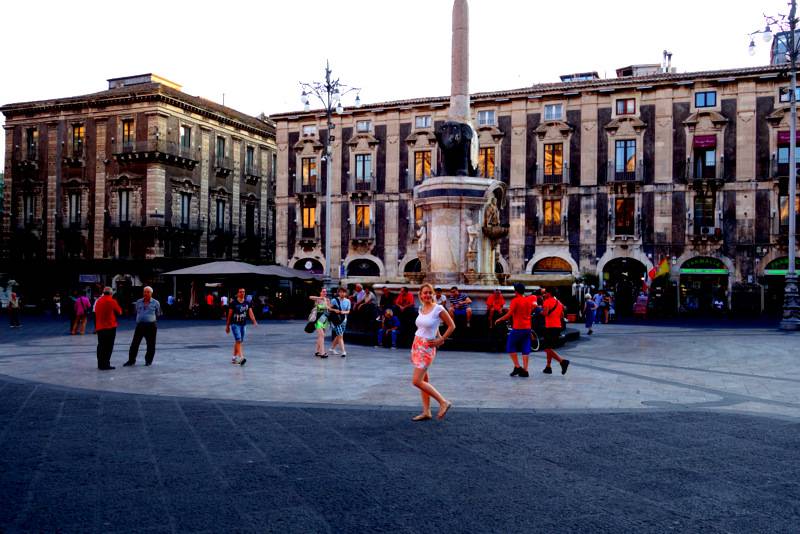 Behind the Piazza Duomo, is the fish market is famous for being the one of the largest and most interesting fish markets of Europe. Here one can find anything they can ever imagine from sea urchins to giant sword fishes. The market is loud and messy , but it is a very interesting experience to visit. They also sell fruits, veggies, cheeses, breads.

Catania is a very interesting baroque city with a fascinating architecture. The buildings are hundreds of years old. We took a small train to travel around Catania and to discover its fascinating history.

We saw some prestigious and beautiful buildings such as the Baroque theatre, some giant churches that were each at least 500 years old. We visited the Giardino de Bellini, which is a he park in the middle of the city. 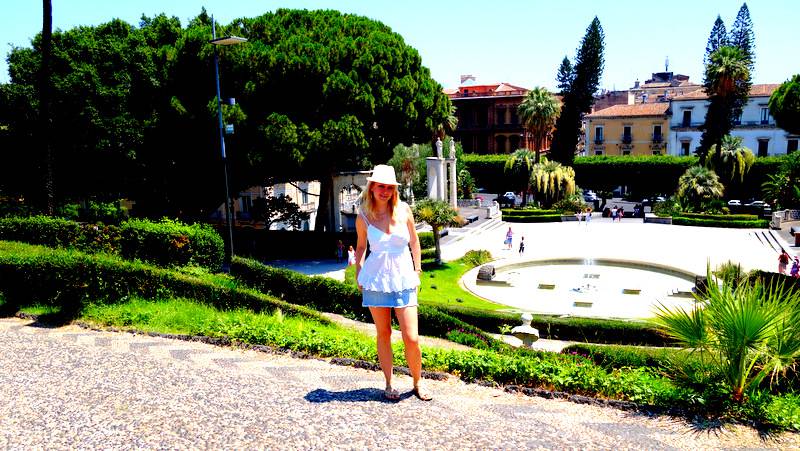 Everything in town is named after Bellini. He is a composer, who came originally from Catania. He has a big statue in the middle of the city as well. We were also fascinated by the fact that the city was built on top of Roman ruins and in many places we could see some remains of the Colisseum.

Via Etnea was the main street that had some great shops and awesome selection of brands. We spent many hours shopping around here.

Things to Do in Sicily

We continued our trip North to the famous city of Taormina. This place is famous for the ancient Greek theatre and some incredible beaches. The small town is situated on the side of the mountain and the ride up there was scenic but also pretty intimidating as the roads are winding and the cliff below you look very steep. Here are a few tips on driving around Sicily.

However, it was an amazing journey along the sea. We stayed at the most incredible and romantic resort, the San Domenico Palace. The hotel is a 500 year old monastery that was converted into a hotel. It is on the top of the hill with the most incredible view of the sea. This hotel is probably the most romantic hotel I have ever stayed in. The hotel is right near the main pedestrian street, behind the Piazza Duomo.

Taormina also has a Duomo in the middle of the city, just like any Italian city. The Duomo (cathedral) is rather small here. As you walk down the main street, there are many cool shops and restaurants. In the end of the main street is the ancient Greek Theatre of Taormina. I have seen this in so many paintings and photos and the view from up there is really spectacular. The theatre is massive. 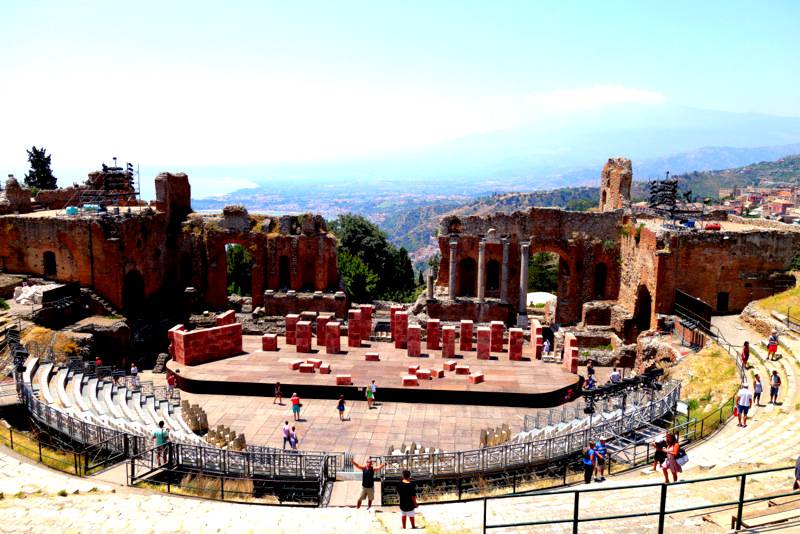 The beaches of Taormina are really beautiful! Bella Insola is one of the most incredible beaches around Taormina. The water is crystal clear. We took the cable car from the center of the city down to the beach. It was a cool experience. 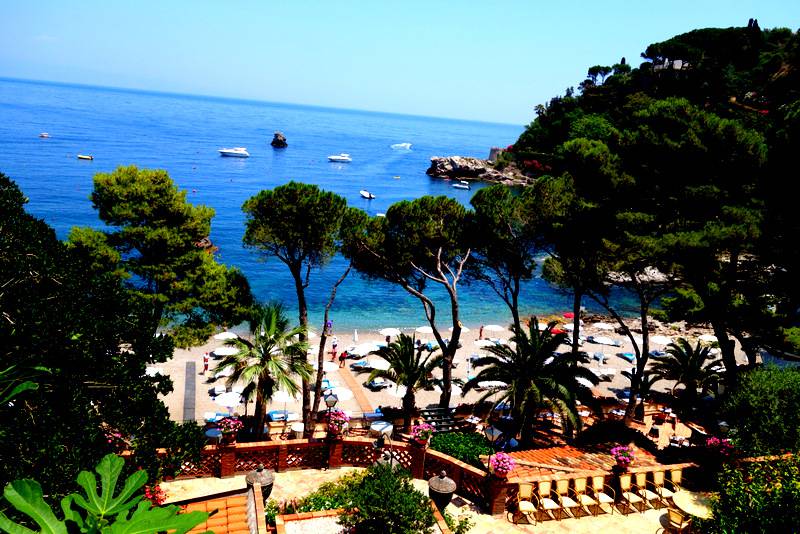 One night we went to the Opera. The Opera is in the middle of the city center with a great rooftop provides an amazing view to the whole city and the sea. We heard various songs such as “O Sole Mio” and other pieces by Puccini and Verdi sang by a young woman and a man followed by a pianist. They were incredibly talented.

We loved Taormina so much, we had a very hard time leaving this beautiful city. Everything about this small town was magical.

We arranged a tour with SAT Travel in Taormina to visit the famous volcano. SAT was very well organized and the tour guide was very well prepared. She was giving a tour in both English and German. We have all heard fascinating stories about the famous volcano and we were intrigued to see it. We decided to go for a sunset tour to avoid hiking in the heat during the day. Our guide told us to dress up in long pants and jacket and closed shoes because it was cold in 3000m heights. We took a jeep to visit craters after craters. They looked like black holes in the ground. 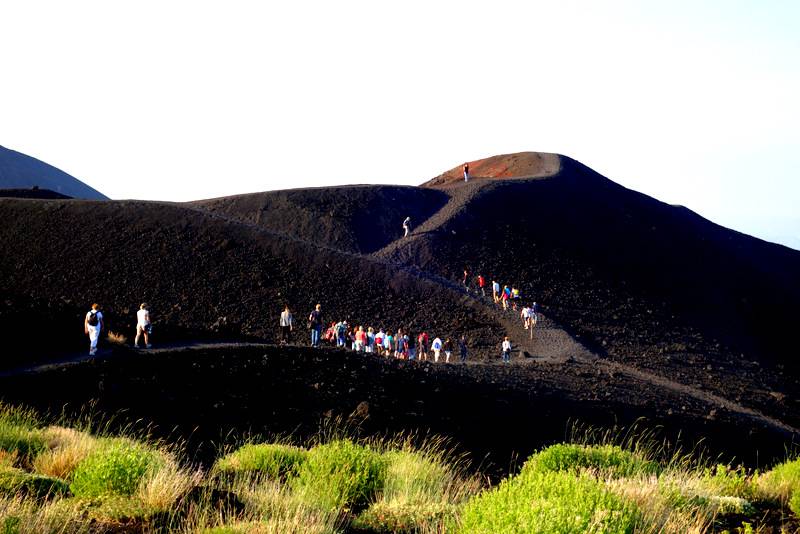 On Top of the Etna, Sicily – The Best Sicily Tourist Attractions

We walked around each crater, we took photos, then they drove us to the top from where we could watch the sun set. The colors of the sun were very beautiful. 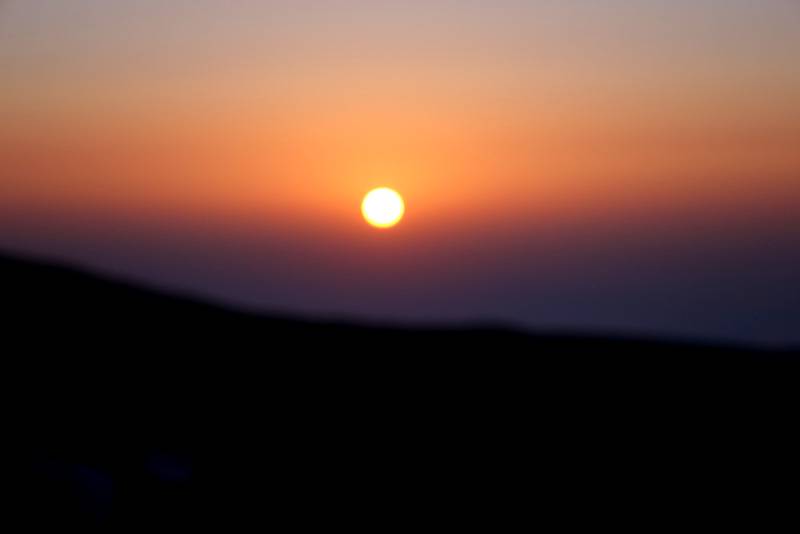 Sunset over the Etna, Sicily – The Best Sicily Tourist Attractions

Unfortunately we could not walk to the top of the volcano as they do not allow people to ascend to the top any more after some fatal incidents in the past. Our guide told us stories after stories of eruptions and devastating lava spills in the past. She also told us about various accidents of people who went too close to the active crater on the top. It was a great experience to reach the top of the Etna and learn about all these stories. After the sun set, we descended with our jeep to the nearby restaurant for dinner. We got home after midnight.

We traveled back to Catania than south to Siracusa. Siracusa is such a beautiful, fascinating city. The main street is aligned with beautiful blooming trees with large pink flowers. The architecture is white and elegant. The whole city is incredibly beautiful. The city has a large historical neighborhood on the island of Ortigia. Ortigia is full of beautiful sites, great shops and amazing restaurants. In the southern tip of Ortigia, you can visit a large castle. The beach around the island is incredibly clean and beautiful. 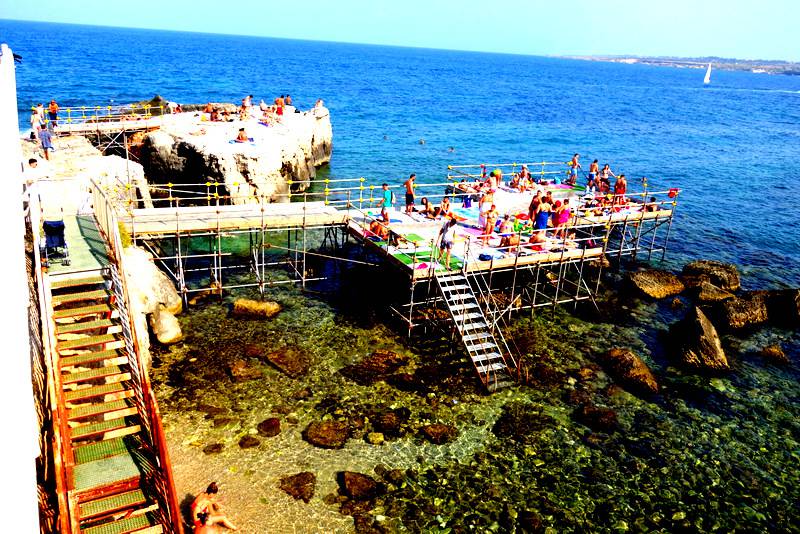 The main square is again the Piazza Duomo and it has a shape of an eye. The building of the Duomo is a beautiful white church with a large statue in front of it. All the buildings around the main square are really old and beautiful. The island is full of historical buildings and churches. Il Parco Archeologico Della Neapolis is a huge park with many interesting ruins of Ancient Greece. The Teatro Greco is one of the largest theatres I have ever seen. 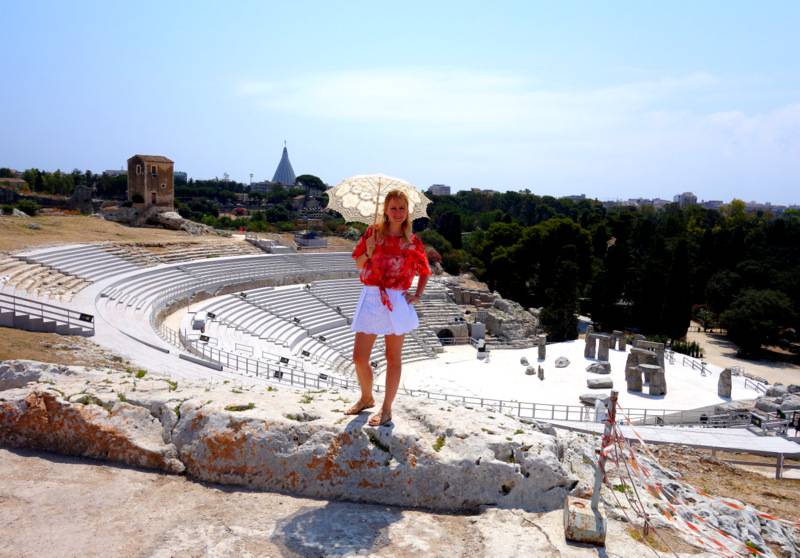 It’s massive. It is surrounded by small caves used by the actors to change their outfits for the plays. We also saw a massive cave. The entrance of the cave resembled a shape of an ear. The cave echoed inside like nothing I have heard before. It was very cool. On the way out we also saw the tomb of Archimedes.

Sicily was one of the most beautiful places I have seen with my own eyes. I will surely be back on the island to explore more of it, because it is magical! 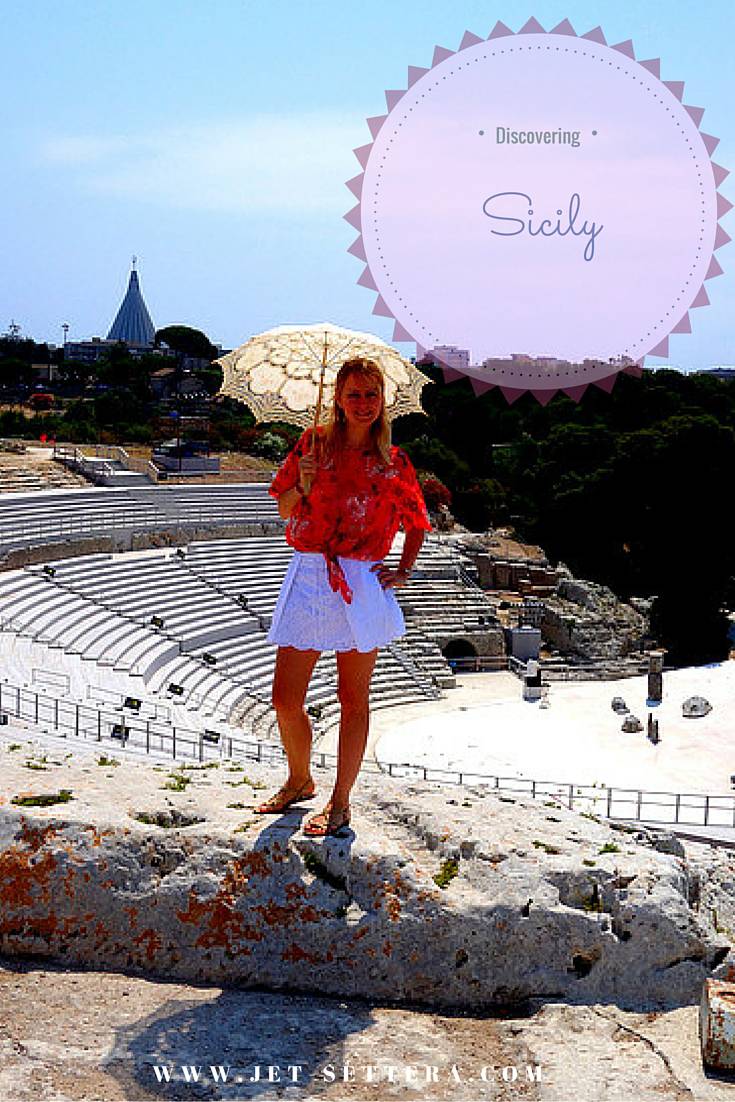