Best Things To Do in Cayo Coco, Trinidad and in Havana 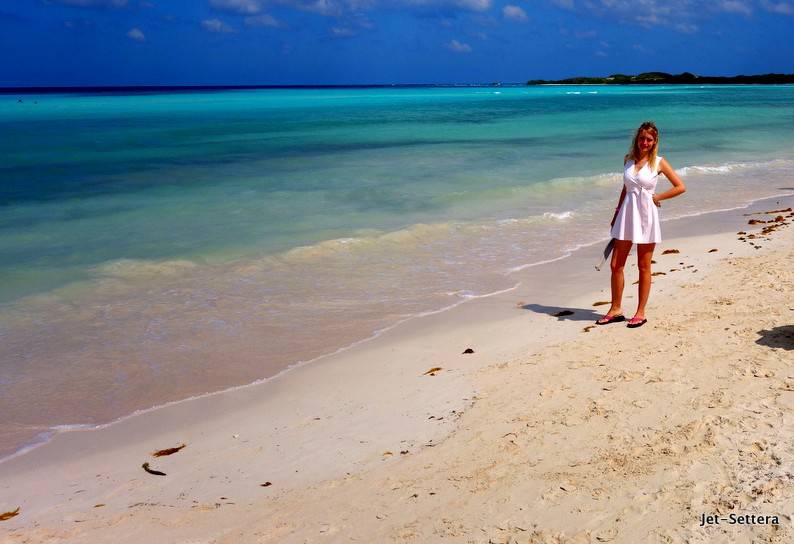 Cuba is a beautiful, culturally rich country. You may need a month to discover the whole country. If you only have a week and want to see the highlights of Cuba, you should follow my guide to see the top things to do in Cuba. There are many interesting things to do in Cayo Coco, Trinidad and in Havana. You will be blown away by the beauty of this country!

Read some quick tips if you are about to embark on your first trip to Cuba.

Returning to Havana after 10 years hit me by a total surprise. Tourists had taken over the city and most of the buildings in the center were under renovation. I was also surprised to learn that in every building the locals were renting rooms to tourists. Cuba had turned into a tourist paradise since my last visit in 2004. There were no more stray dogs on the streets, people were not asking me for money everywhere, but I could barely walk from all the tourists. After settling into my accommodation in Old Havana, I set out to discover this fascinating and culturally rich city. As the night had set, bands were playing traditional Cuban music in every restaurant. The atmosphere on the street was incredible. Streets, restaurants were packed with tourists and the music could be heard everywhere.

I sat down at a restaurant to have a Mojito and some traditional Cuban slow-cooked shredded beef and to listen to the band playing. 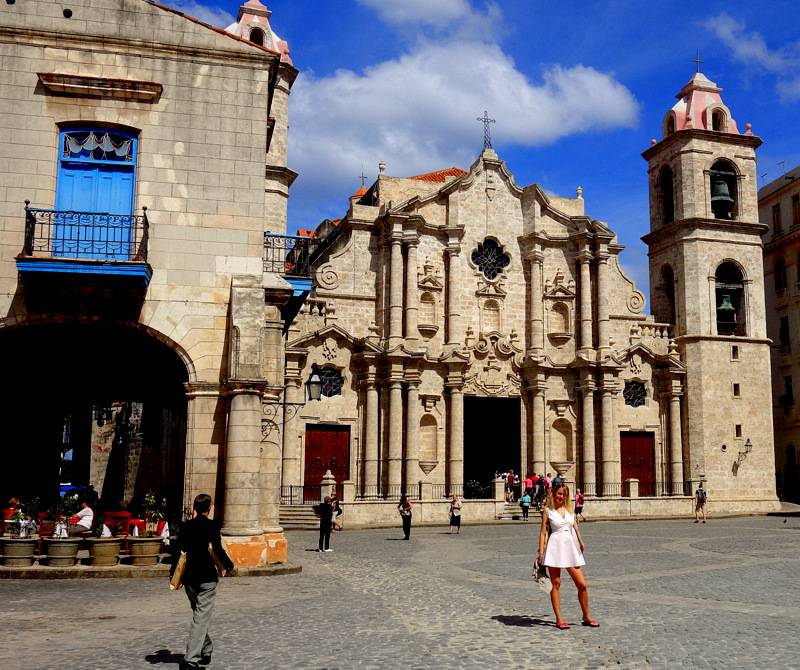 Old Havana, Top Things to Do in Cuba

The next morning we hopped on the double decker bus to take us around this enormous and magnificent colonial city. The bus tour allowed us to discover every neighborhood of Havana, Vadedo, Havana Viejo, it drove along the beach of Malecon. 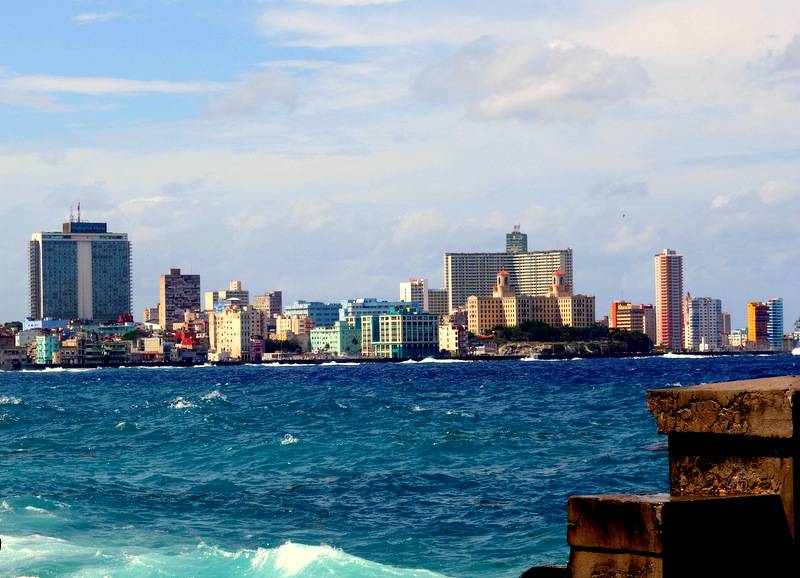 Malecon in Havana, Top Things to Do in Havana

The ride lasted for over an hour and the tour gave an excellent overview of the history of Havana. We also drove by the cemetery of Vadedo which was more than 5 kms long. It was a fascinating journey around Havana.We could observe the communist influence on the traditional colonial Spanish architecture. We saw the famous old hotel the Hotel Nacional as well as the Chinatown of Havana. I loved seeing colorful graffiti on the walls everywhere of revolutionary figures (Fidel, Che or Chavez) as well as local people.Havana was beautiful, colorful, chaotic and fascinating. 50-60 year old colorful cars were driving tourists around the city on sightseeing tours. The Hemingway heritage could be observed in many places. Hotel Ambos Mundos still preserves the suite where Hemingway used to live. La Bodeguita del Medio, the famous Mojito bar where Hemingway spent his time is still open today to visitors. A man dressed in white is sitting outside of it with a typewriter for tourists to take photos of. 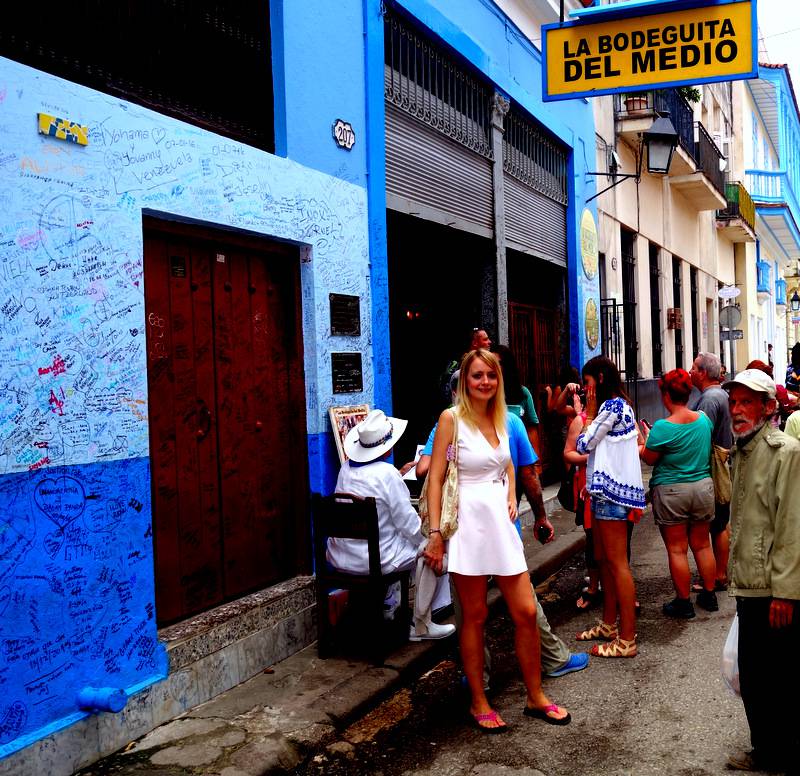 The currency was confusing, because there was a separate currency for tourists and for locals, so we could not pay with our currency in most stores, markets, where the locals shopped. We found working ATM machines in Havana and we even figured out how to get online. It wasnt easy and it wasnt cheap. 10 years ago there were none of these. 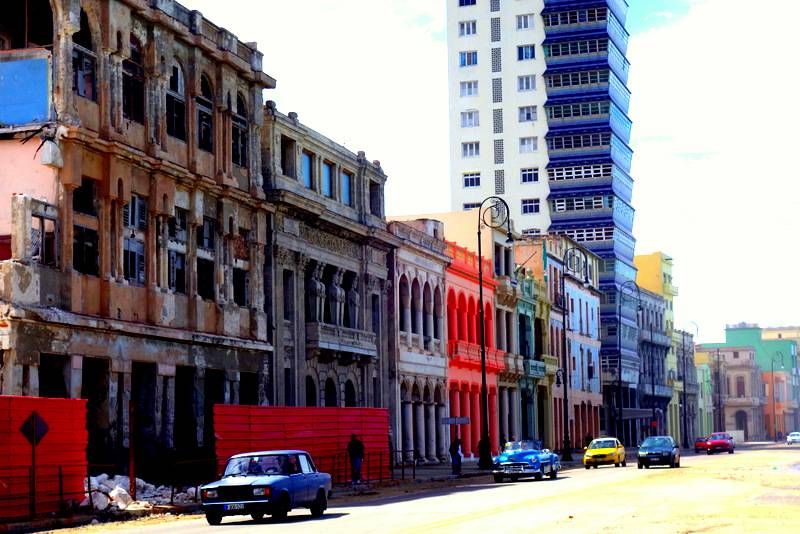 Because Internet was pretty much non-existent in Havana, we found a local travel agency and we booked our trip to Trinidad and then to Cayo Coco. A mini van was going to pick us up and drive us to Trinidad at around 2pm in the afternoon, but our transfer arrived 2 hours late. The driver jumped out of the car smiling and helped us get into the car. He didnt feel bothered by the fact that we stood on the street for a long time waiting for him. Welcome to the Caribbean, I thought. 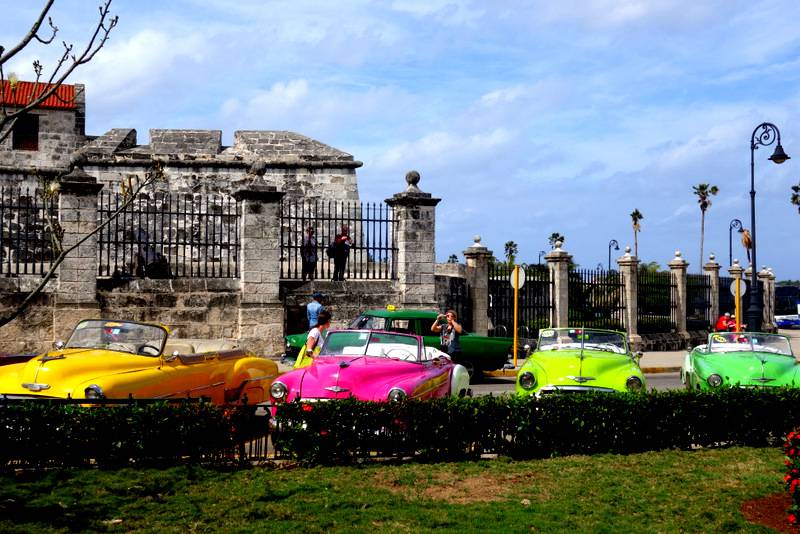 After about 5 hours on the road, we arrived to Trinidad and we stayed in a beautiful room in a very nice house for two nights at Casa China. We were suffering from a food poisoning that we contracted from a dirty coconut we ate on the street in Havana. Despite of being ill, I ventured out to discover Trinidad,  and I ended up at the local Salsa Club. I liked the place so much, I went there again the day after. Trinidad was absolutely packed with tourists and everyone was on the street. The city is a UNESCO World Heritage Site. 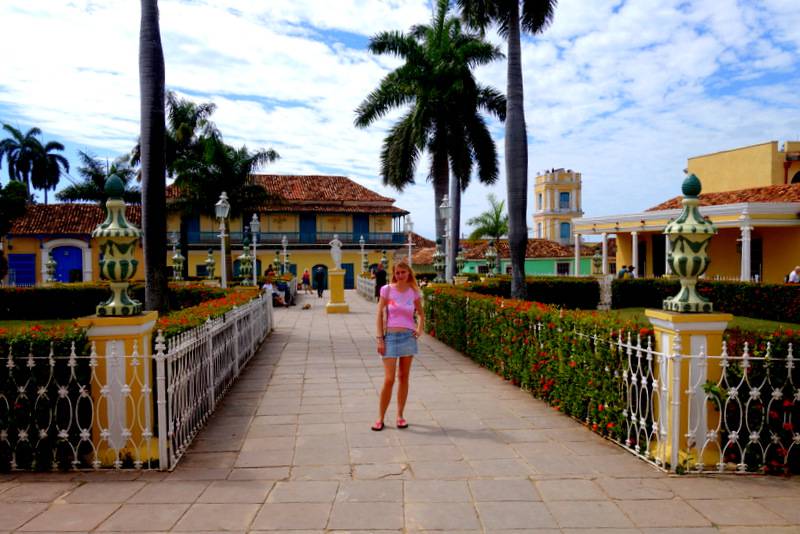 Trinidad, Cuba – Things to do in Cayo Coco, Havana and Trinidad

It is like a small gem. It is famous for its colorful houses and colonial architecture and the beautiful cathedral in the middle of the town. The locals were playing music everywhere on the streets, some people were dancing. The atmosphere was amazing. 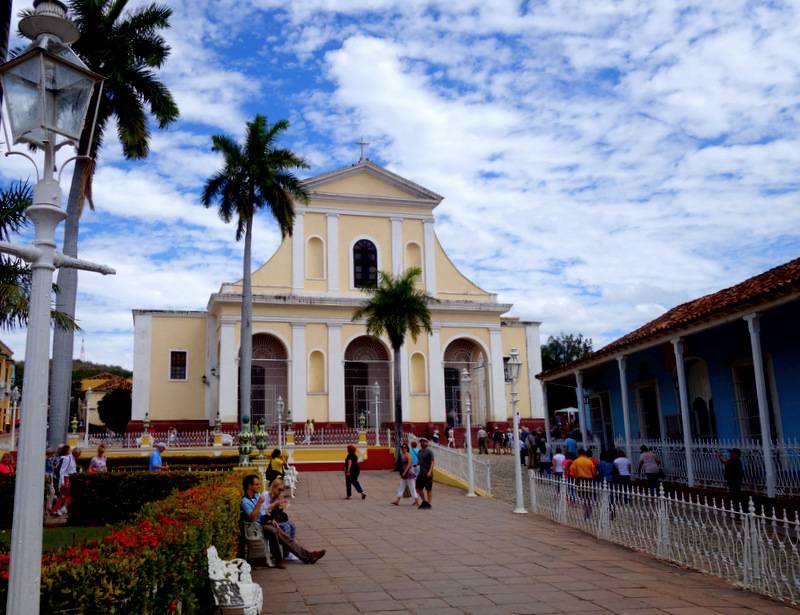 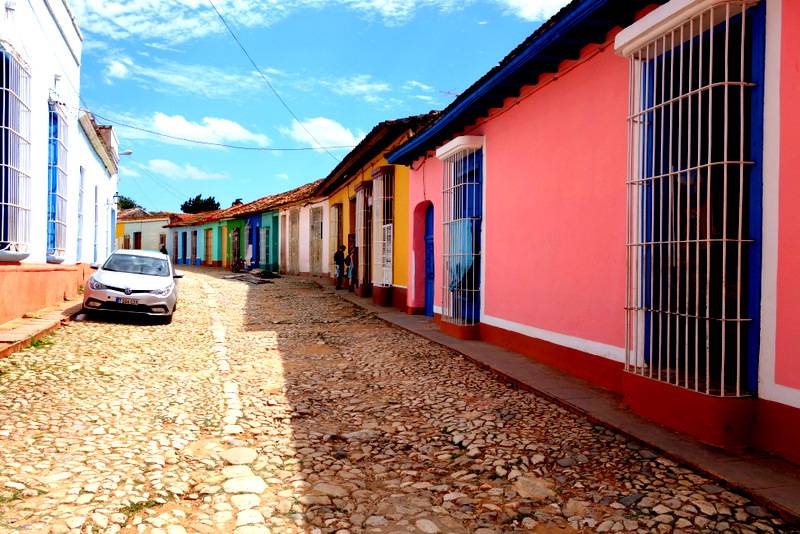 After 2 days in Trinidad, we hired a taxi to take us to Cayo Coco. The old communist Moskvic was fragile, I could barely open its doors, but the driver was very smiley and kind. One of the best thing about Cuba is the warmth and kindness of the people.

Things To Do in Cayo Coco

Coco Keys are a chain of islands, with white sandy beaches and crystal clear water. The keys are famous for beautiful birds like pink flamingos and white ibis. Cayo Coco was a touristy island saturated with 4-5 star hotels without any locals living there. The hotels were huge, offering all-inclusive services. Our resort had 7 restaurants and food and drinks were served everywhere. The hotel was packed with Canadian tourists. Many of them were trying to make their money worth, by eating everything they could get their hands on. The hotel was great fun, the gardeners made us straw hats. Every night there was a show with dancers and singers. Coco Keys were a real paradise and much more reasonably priced than the same hotel would be in Mexico or anywhere else in the Caribbean. Everyone who visits Cuba should visit Cayo Coco to enjoy this wonderful Caribbean paradise. 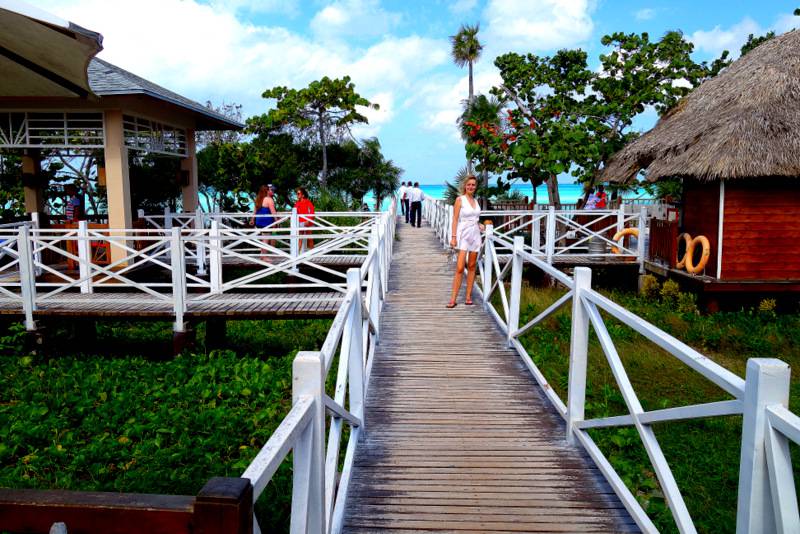 Things to do in Cayo Coco

What’s your favorite spot in Cuba? Leave a comment below! 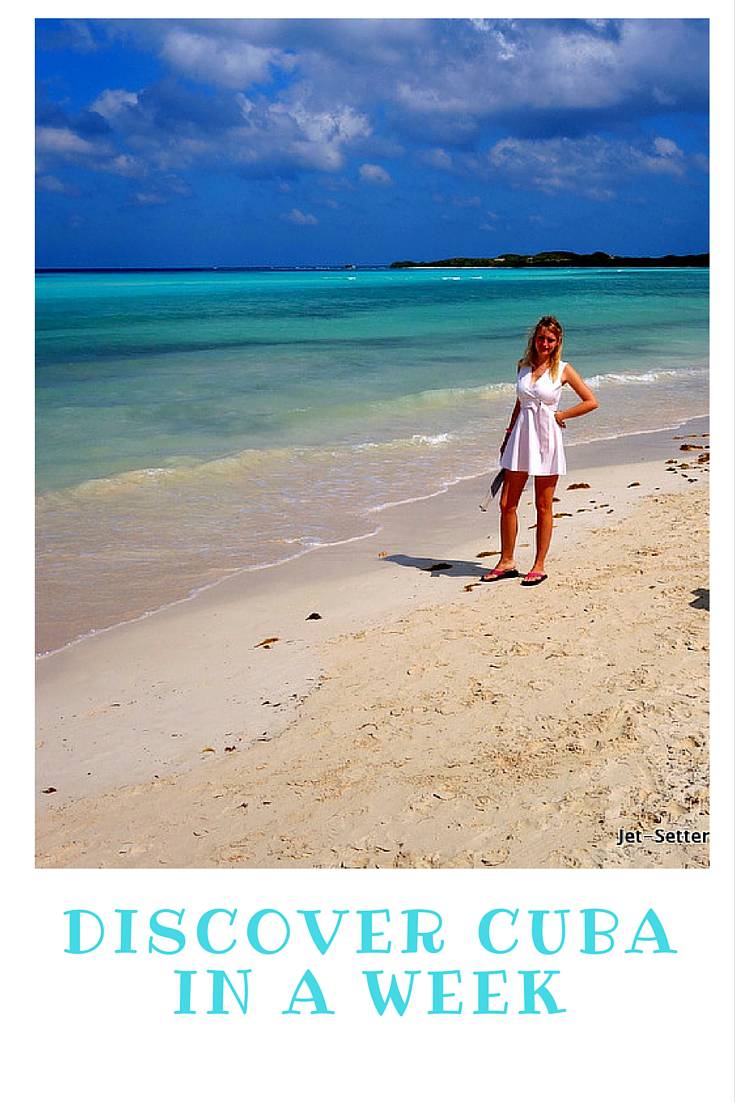 Things to do in Cayo Coco