Luxurious Things to Do in El Nido, Palawan in The Philippines 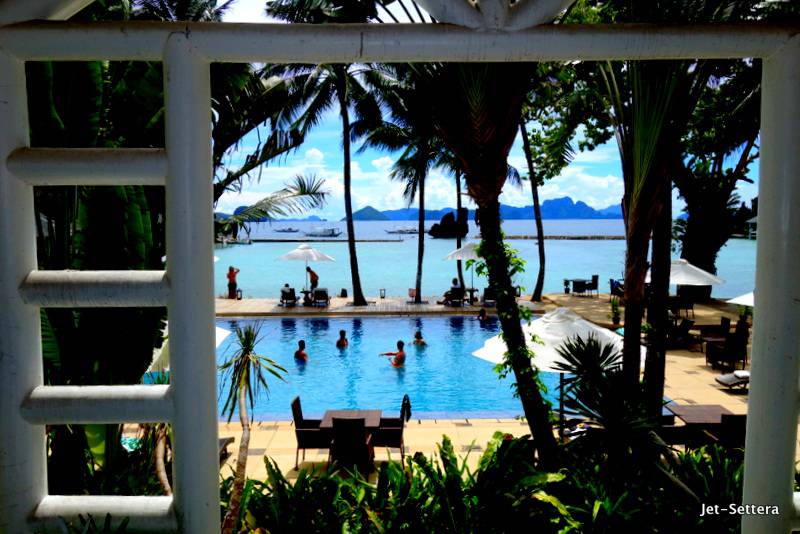 I was super excited to return to the Philippines after my first visit five years ago. Back in 2011, I visited Boracay Island, which immediately charmed me with its white sandy beaches and incredible marine life. Ever since this trip, returning to the Philippines, and in particular exploring the islands of Palawan, have been on my bucket list. The Philippines consist of 7100 islands, 1700 of which are in Palawan. I have seen many amazing photos of the Palawan and I was thrilled to return to this beautiful region to explore the luxury that the el Nido Resorts have to offer on these paradise islands.  There were many amazing things to do in El Nido and I was excited to explore these beautiful islands.

Read more about traveling to Palawan with the family on the Just Go Places  Blog.

Read more about the top 10 places to do in Palawan.

Luxurious Things to Do in El Nido, Palawan

We hopped on a small plane at the domestic airport in Manila and flew for an hour from Manila to El Nido to arrive at the most beautiful island that you can ever imagine. Our Manila to El Nido flight was quick and easy. As soon as we landed, we were surrounded by lush greenery, limestone formations and crystal clear water. We were amazed at the astonishing scenery. The island reminded me of the green mountains of Oahu, Hawaii. However, el Nido, Palawan, was much more authentic and less touristy than the Hawaiian Islands were. We took a Jeepney (typical Philippino bus) to the smallest terminal I have ever seen, where we were greeted with Filippino snacks and refreshments. From there, we hopped on a boat, then a bigger boat and another smaller boat to reach our private island where our hotel the Panglusian Resort was located. This hotel is rated to be one of the best hotels in the World and it is definitely the best one of the El Nido, Palawan hotels. 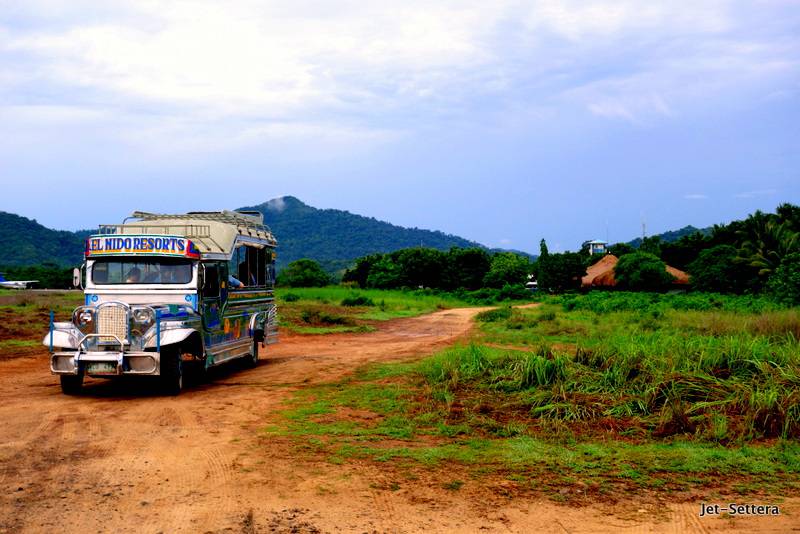 Arrival to the Panglusian Resort

Panglusian Resort is the most exclusive hotel of the four El Nido Resorts. Hotels in el Nido are located on separate private islands. It took about half an hour to reach the resort and we were all speechless by the beauty of the surrounding landscape. 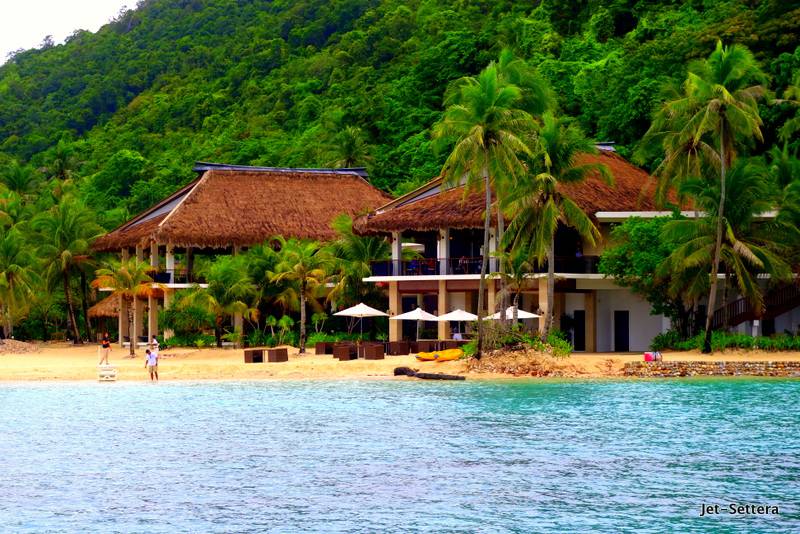 As we landed on this charming private island, the hotel staff waited for us with wet refreshing towels and watermelon ginger cocktails. The staff was really friendly. They were smiley and attentive all the time. The hotel consisted of a series of luxury bungalows along the beach. It was an eco-luxury resort in the middle of the rain forest. We took the golf cart around the island to reach our bungalows and often I could see large lizards running around the trees. Everything inside the bungalows were made of wood. The bedroom was enormous and the bathroom was the largest I’ve ever seen. This was certainly the amongst the best hotels in El Nido, Palawan. 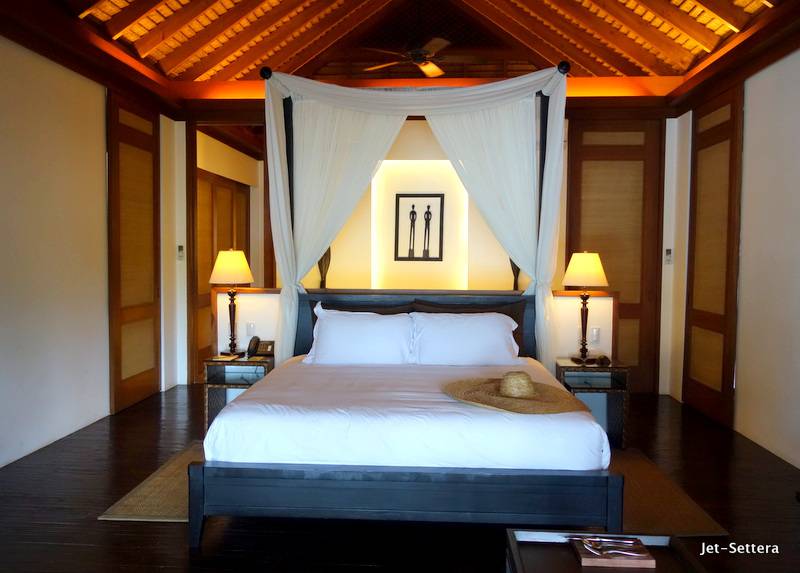 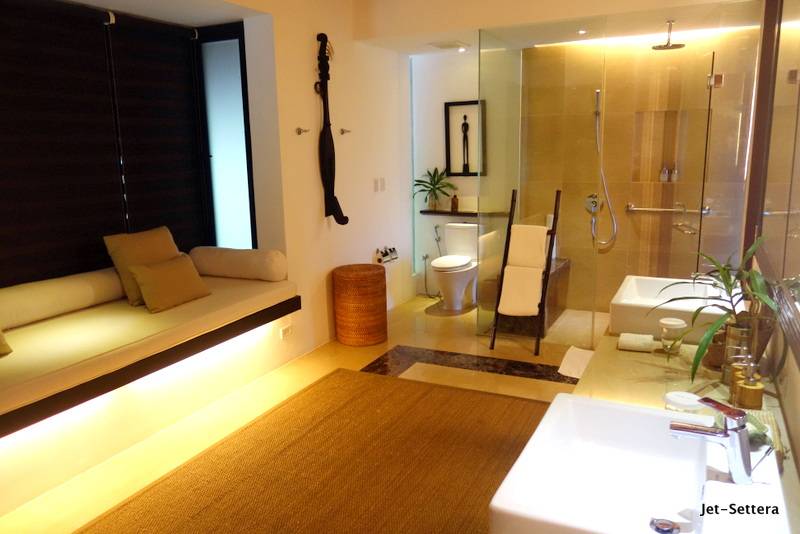 Everything inside was eco friendly and made from natural ingredients. I particularly liked the lemon grass oil that was used as mosquito repellent. The hotel had a beautiful library as well as a huge infinity pool. Everything about the hotel was astonishing. 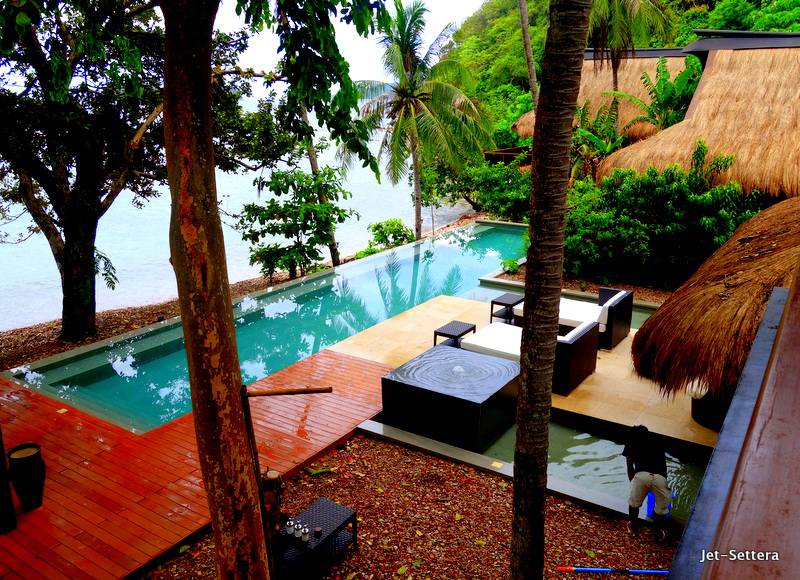 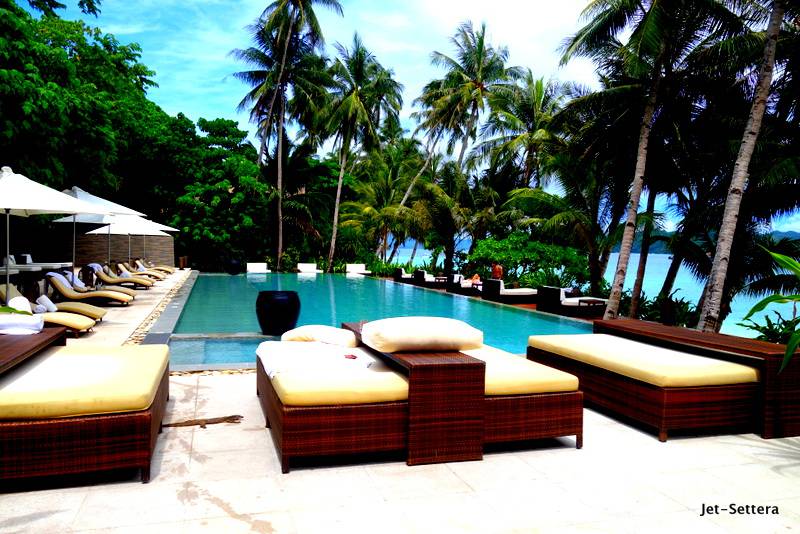 Swimming Pool of the Panglusian Resort in El Nido Palawan

After refreshing at the hotel, we hopped back on the boat and headed to another resort of the El Nido Resorts group to have lunch. Lagen Island was another spectacularly beautiful El Nido beach resort, where we could enjoy the beautiful scenery of the islands and the white sandy beaches of the Philippines. El Nido, Palawan in the Philippines has the most beautiful beaches I have ever seen. The restaurant offered a wide variety of options for lunch. The food was fresh and tasty and the scenery was fabulous. 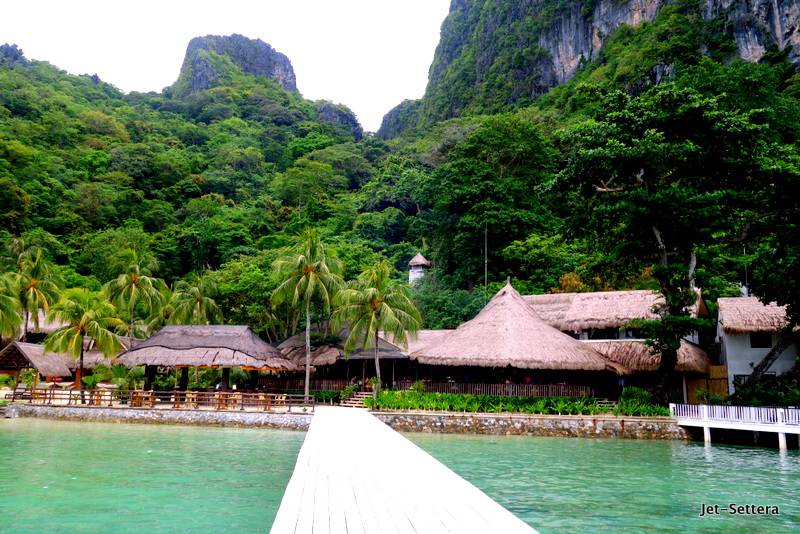 Lunch at Lagen Island of the El Nido Resorts

El Nido Island Hopping and a Tour of Snake Island

After lunch we hopped back on the boat to observe the wonderful scenery of the surrounding islands. We cruised around the spectacular lime stone formations, we visited some caves, saw beautiful beaches and lagoons, and swam in the crystal clear water. It was a beautiful day spent on the boat. There were not too many tourists and we felt like we were in an exclusive place far away from civilization.

Cruising the Islands and Lagoons of El Nido Palawan

Dinner by the Infinity Pool at the Panglusian Resort

In the evening, we had a candle lit dinner by the pool in our hotel. A delicious four course meal was served. It started with a ceviche, followed by a salad and a soup. After that a wonderful local Filippino chicken specialty was served. The dinner finished with a banana bread/flan cake. The atmosphere was very romantic. We were listening to the waves crashing behind us while we could hear the birds and animals of the forest. The Panglusian Resort is definitely the best place to stay in el Nido, even the food was amazing in this hotel. 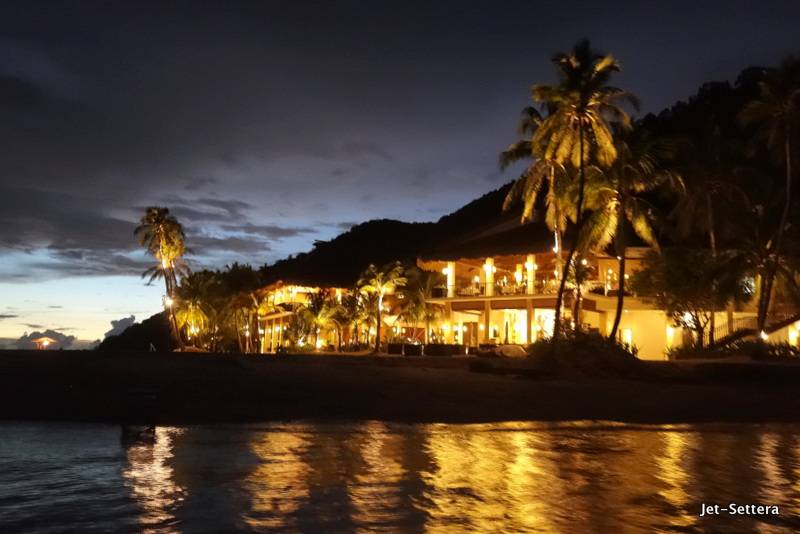 Panglusian Island lit up at night

The next morning, we hopped back on our boat to tour the lagoons. We saw some spectacular white sand beeches with long skinny palm trees from the boat. In the end we stopped by a beach, where I went snorkeling. I had dived in the Philippines before and it has always been one of my favorite diving spots in the World, so I was really looking forward to exploring the underwater life of Palawan. All I can say is that I was not disappointed for a second. There were colorful corals everywhere and beautiful small fish. It was like swimming in an aquarium. The Philippines is by far one of my favourite diving destinations in the World. 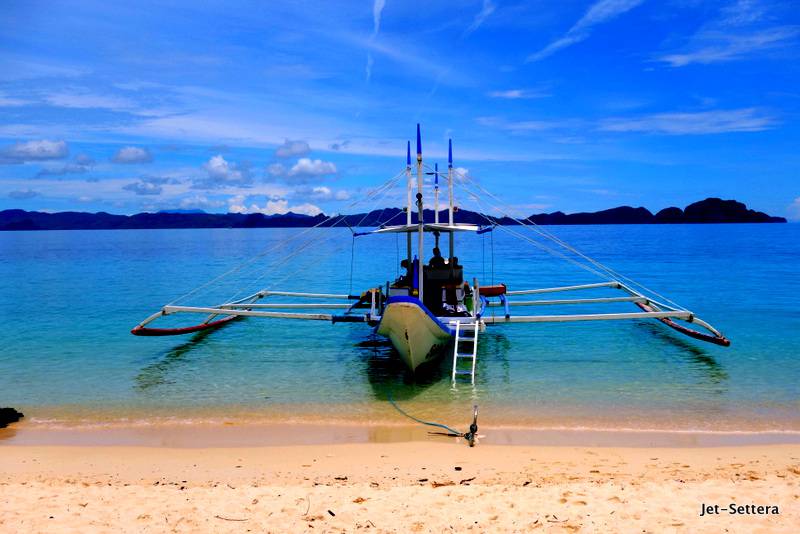 After cruising through the beautiful lagoons and beaches of the el Nido Islands, we sailed to the Miniloc Island to have lunch on the beach. Miniloc Island was also part of the El Nido Resorts chain. The resort consisted of a series of bungalows above the water. It was a wonderful place with beautiful views to the sea. It was one of the best ones of the el Nido, Palawan resorts. We had lunch on the terrace of the hotel overlooking the swimming pool and the sea. The hotel was very luxurious. After lunch, we walked around the island to explore the surrounding forest. We saw large birds flying above us. It was a very special experience to visit this exquisite island and indulge in the luxury that this place has to offer. 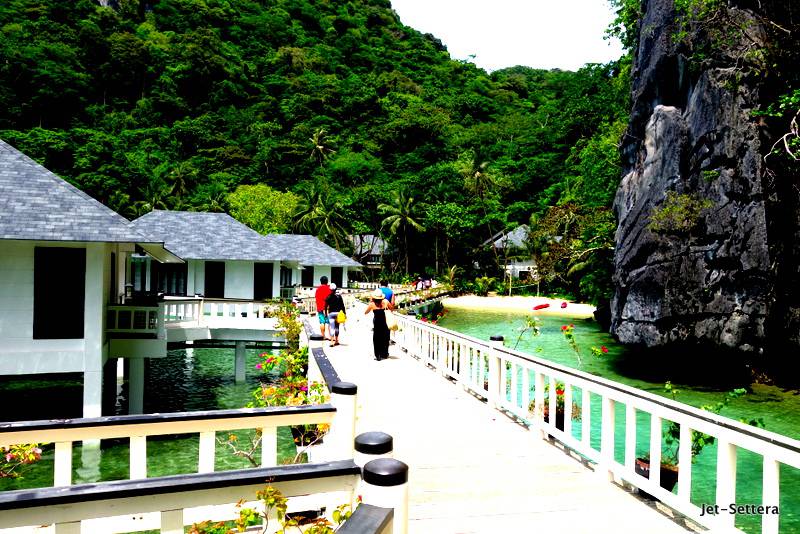 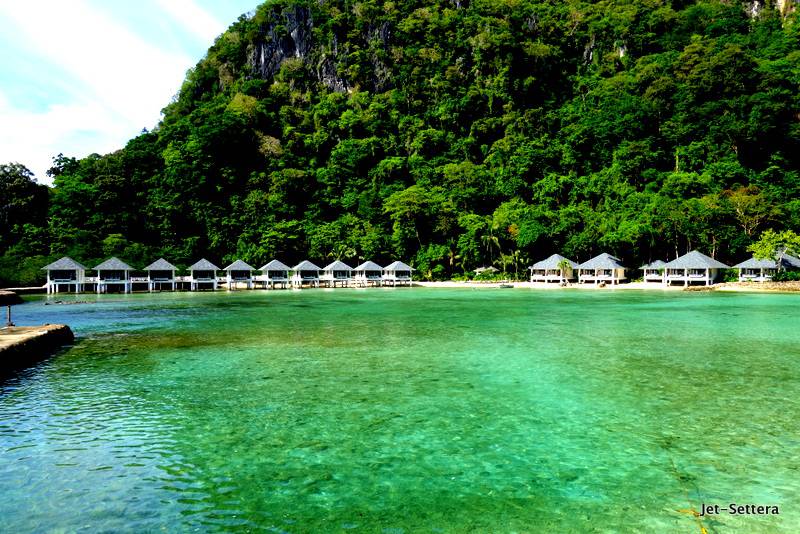 Ending the Day on a Sunset Cruise

If you are wondering what to do in el Nido after the sun sets, hop on a sunset cruise and watch the most colorful sunset you have ever seen. After getting on our private boat, we sailed around for about half an hour and we were in the middle of the open water. We watched the sun going down and the sky turning into various colors. It was very special. After the sun went down, the guys on the boat popped a bottle of champagne and served cheeses and fruits for us. We cruised back to our hotel and finished our day with another four course dinner on the beach, listening to the waves crashing behind us. 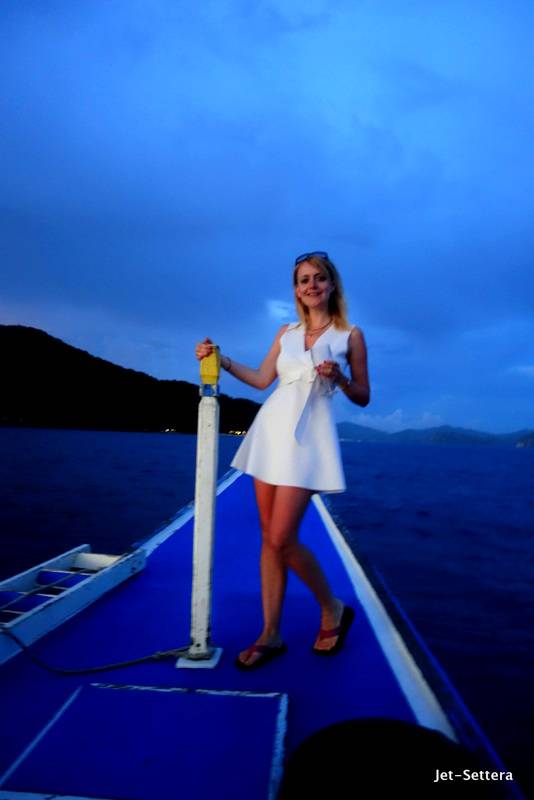 We started the day at 6:30am and headed out on our water taxi to the house reef of our island to snorkel with the black tip sharks. I was totally excited about this activity as I love underwater life. The water was crystal clear and warm on this secret beach in El Nido. As soon as I jumped into the water, I saw colorful corals and fishes everywhere. Barracudas were swimming in groups in every direction. I kept on swimming around losing my group until I found a family of black tip sharks by the reef. They were about 2 m long. They were slow and not bothered by my presence at all. I heard they can be aggressive sometimes. They did not look aggressive to me at all. There were lots of parrot fish and various other creatures in the sea. Colorful corals were moving around in the sea. Snorkeling and seeing the ocean life was the highlight of my vacation in el Nido, Palawan. Scuba diving and snorkeling can itself be a reason for anyone to visit the Philippines. 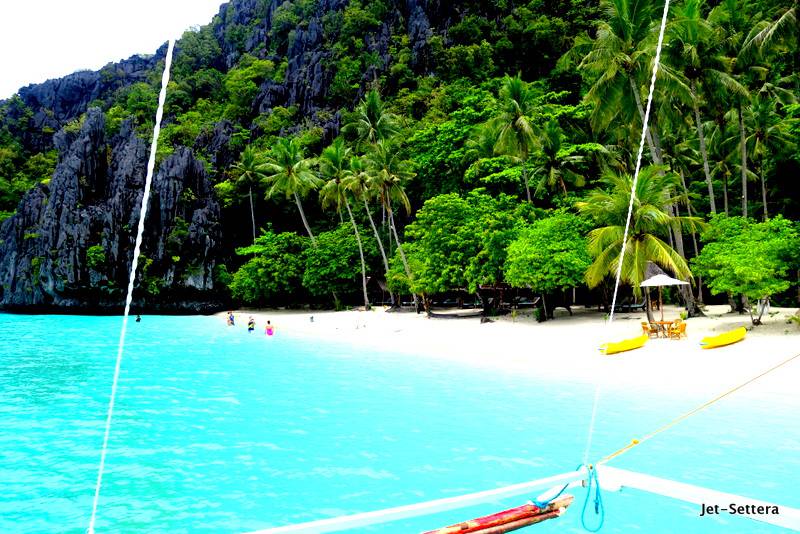 Beaches of El Nido Palawan – things to do in El Nido

Lunch at a Private Island of Entalula

Entalula is an exquisite private island for an exclusive lunch or dinner for el Nido Resorts’ residents. The beach restaurant was made out of bamboo. They served the food on banana leaves in wooden bowls. It was a very authentic Filippino experience. It felt like having a picnic on the beach. The bamboo hut we ate at was surrounded by tall palm trees and we had the scenery of the beautiful white beaches in front of us. There were so many amazing things to do in Palawan. I was blown away by these islands. 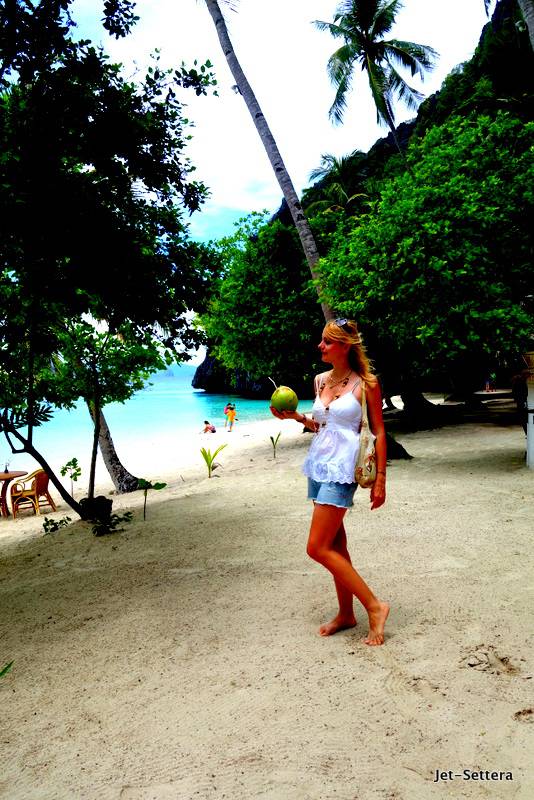 Coconut Juice in Entalula Island – things to do in El Nido 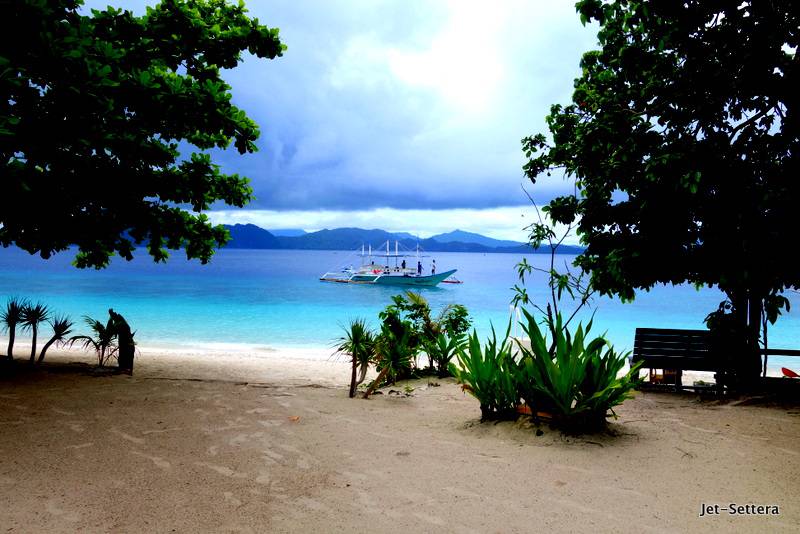 Beaches of el Nido Palawan – things to do in El Nido

Sadly, our vacation came to an end and we had to head back to the airport to depart for Manila. As we were departing the Island of Panglusia, the band of the hotel was singing for us and they waved us good-bye from the shore as our boat took off for the airport. The airport was the smallest most authentic island airport I have ever seen. There was a check-in desk in the middle of the forest and another table, where the security check was taken care of. Security check meant that a guy opened my luggage and manually searched through it. The waiting area was under an open air bamboo hut, where they served soft drinks and local delicacies. Jeepney’s were transporting the tourists to small planes. A group of local ladies were dressed in local outfits and they were singing us local songs as we were boarding the Jeepneys. It was a really wonderful experience to see such an tiny, authentic airport. Then we flew from El Nido to Manila and arrived to our hotel in Manila for dinner. 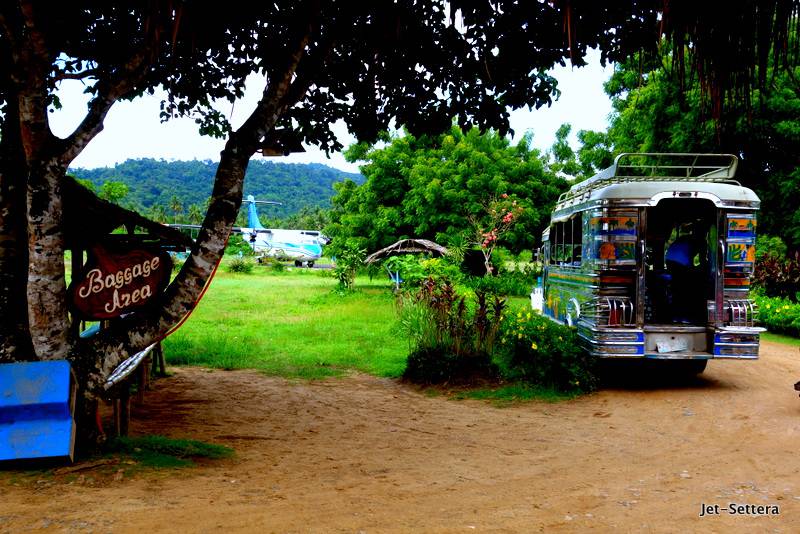 Airport in El Nido Palawan -things to do in El Nido 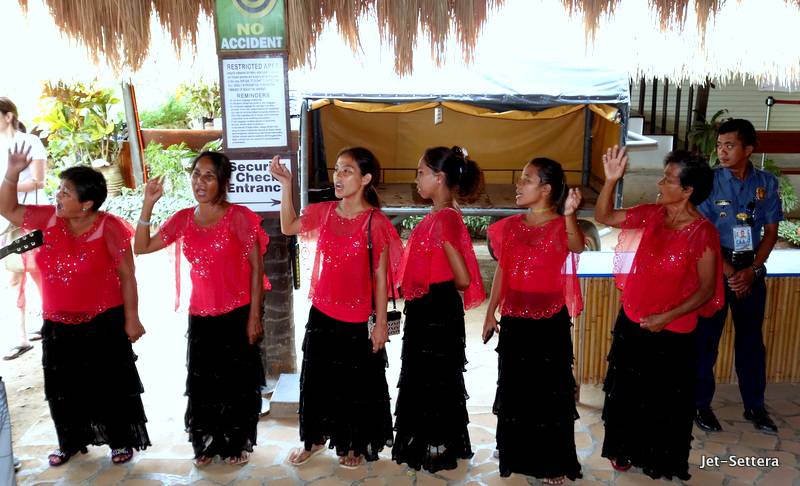 The three days we spent in the El Nido Resorts were a very special and unforgettable experience. We were humbled by the kindness of the locals we met during our time on these paradise islands. This was my first experience in an exclusive private island and I can recommend it to anyone looking for a romantic get-away or a real authentic experience in an enchanting paradise. So if you want to visit el Nido, Palawan and wondering where to stay in El Nido, stay in one of the above mentioned El Nido Resorts. 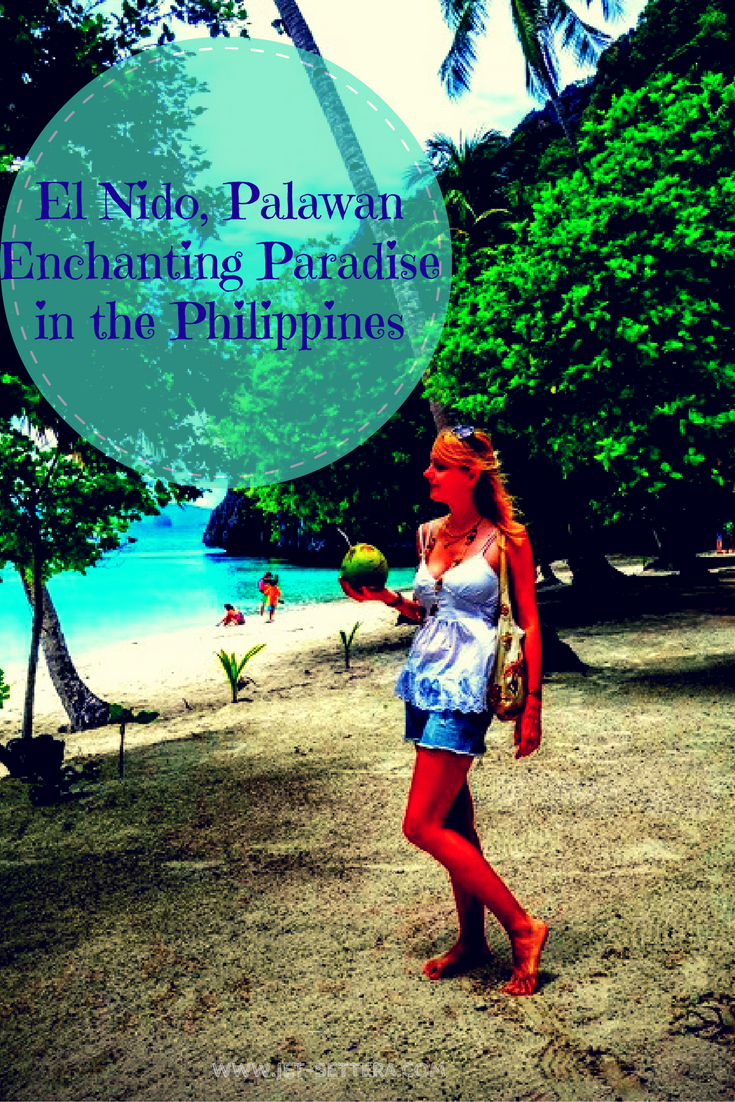 Disclosure: I participated in the above trip free of charge for the purpose of this article and the article reflects my unbiased opinion about the country.