Best Things to Do in Yangon, Bagan and in Mandalay in Burma

Best Things to Do in Yangon

Discovering Burma was one of the greatest adventures of my life. I arrived to Yangon, after traveling for 24 hours. Travel to Myanmar is not very easy. I had to fly from New Delhi to Bangkok and then from Bangkok to Yangon. Yangon is the kind of place, where there are no ATMs and you have to arrive with enough money in your pocket to last until the end of your journey. So, I always had to calculate and budget all the time to make sure I had enough money until the end of the trip.

I was exhausted when I got here, but I decided to get out and explore the city. I went to the market. Actually the whole old town was a big market. Vendors were selling all sort of things on the street. Every street was specialized in a different product. One street would only sell hardware, the other only sold spices and nuts the next one jewellery. I enjoyed walking around the streets of Yangon. Yangon has a beautiful colonial architecture and wide avenues. One of the best things to do in Yangon was exploring its beautiful Buddhist temples. 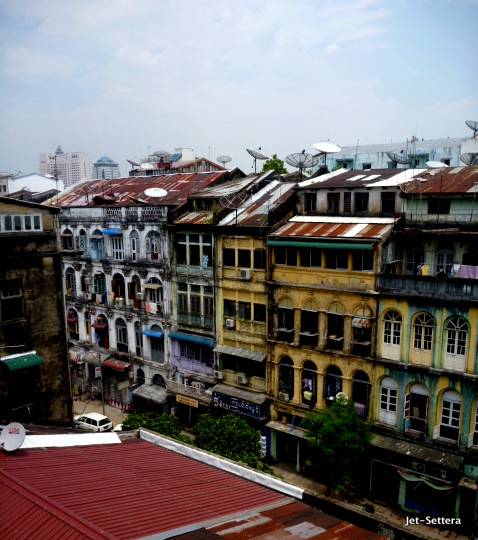 Architecture in Rangoon, Best Things to Do in Yangon

The town has spectacular Buddhist pagodas. The biggest and the best Myanmar temple is the Shwedagon pagoda. I loved this place. It was so spiritual. 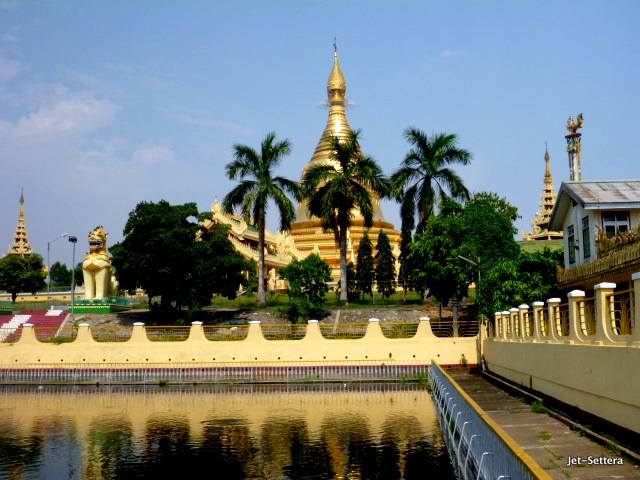 Shwegadon Pagoda, Rangoon, Best Things to Do in Yangon

Everything inside the pagoda is made out of gold and mirrors. It is so beautiful! This was the first time I saw a disco Buddha. Disco Buddha is a Buddha with a glory around his head that lights up like disco lights. Visiting temples was the one of the main things to do in Myanmar. You never wonder what to do in Yangon for a second, as there are so many places to visit. There is a temple on every corner. 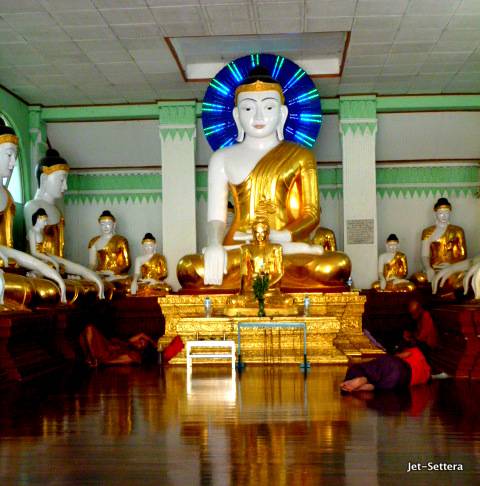 Disco Buddha, Rangoon – Best Things to Do in Yangon

I thought this was really cool and I called it Disco Buddha. Later on I saw many other disco Buddhas in Burma. After reading Tiziano Terzani’s A Fortune-Teller Told Me, I decided that if I ever travel around the Far East, I will visit a fortune teller in every country I go to. I saw a palm reader in India. He told me some interesting things, however, I was not that impressed. I had a Burmese friend in New York and he told me I should call his mother, when I m in Burma and she would take me to a very good fortune teller. She did pick me up with a car and a driver and drove me to a fortune teller in the outskirts of Yangon. The fortune-teller was nice, but I don’t think she was that great. We had a wonderful Thai dinner in a beautiful Thai restaurant with my friend’s mom after the session. She was kind and hospitable. Restaurants in Yangon are usually very basic, but this place was amazing! I guess, you should always go with a local if you want to find awesome places.

The next day I visited some other pagodas. There were many places to visit in Yangon. The city was much bigger than I expected it to be. In the evening, I took the overnight bus with a French girl to the North to visit Bagan. The bus was full of monks. The funniest part of the bus ride was, when somebody needed to use the toilet, the person would yell out something to the driver in Burmese. The driver would stop the bus on the highway and everyone got off the bus, lined up next to the bus and peed. I thought it was very funny.

We arrived to Bagan at 3am in the morning. We checked into the nearest hotel and went to bed. It was pitch black outside. In the morning we woke up and got out to explore the nearby Buddhist temples on a rented bike. There are 4400 temples in Bagan and they are all around 1000 years old. The temples of Bagan are the best of Myanmar tourist attractions. It is a fascinating place. I really enjoyed being there. It was like flying back in time. Each temple was very old and huge and they each had a humongous Buddha inside. 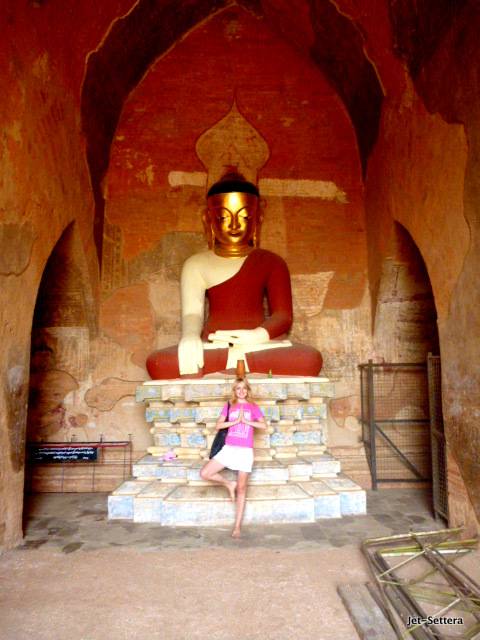 Buddha in Bagan – Best Things to Do in Yangon, Bagan and Mandalay

The nicest temple had 4 huge golden Buddhas inside. It was really beautiful! I was very happy to see this wonderful, spiritual place. The next day we rented a horse carriage because we wanted to venture out further and visited the biggest temples of Bagan. These temples were as big as some Maya temples in South America. 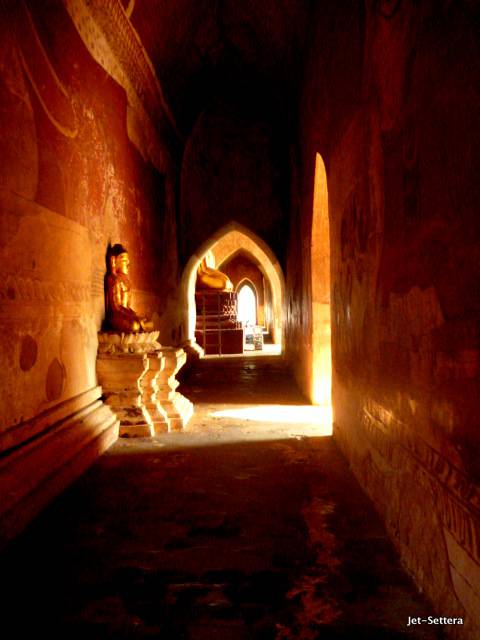 Buddhist Temple in Bagan- Best Things to Do in Yangon, Bagan and Mandalay

We ended the day on top of the biggest temple to see the sunset. From that point you could see the entire Bagan. The temples looked like many little mushrooms on the field. Bagan was the best of the Myanmar tourist spots. It was a wonderful day! 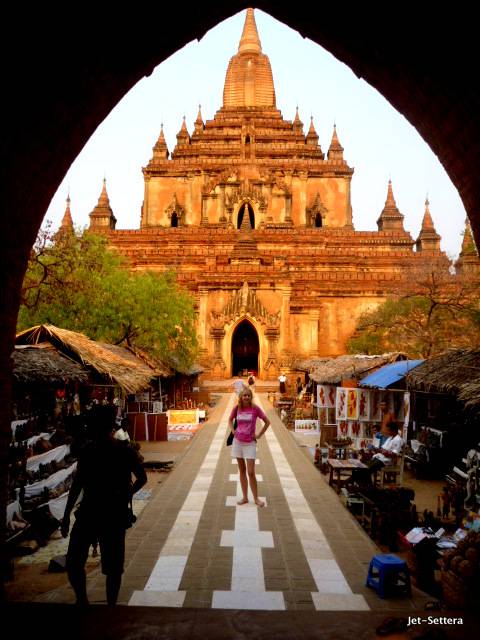 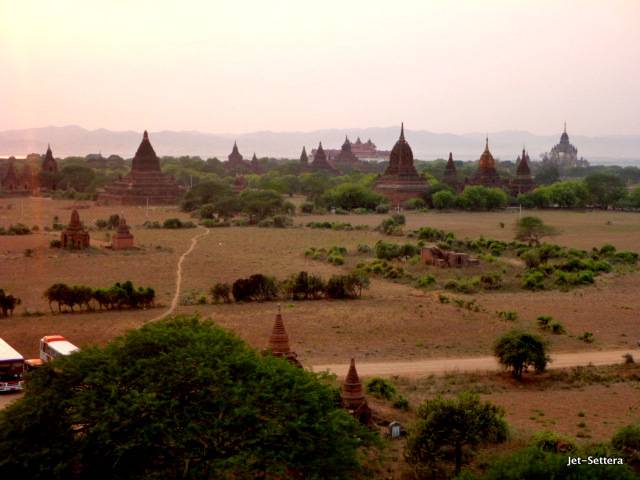 I decided to take the first bus to Mandalay at 7am in the morning, but I didnt realize that in Myanmar not all the buses are the same. Once I was on the bus, I found out that I was on the commuter bus that only locals took. So I was sitting there with all the locals around me. They shuffled as many people onto the bus as possible. People were stepping on my feet a kid was sleeping on my shoulder. Locals came with their bags and baskets and boxes and everything else you can imagine. There were people traveling on the top of the bus. I got the seat in the front with much leg room. I guess that was supposed to be the VIP seat. Most local women in Myanmar wore yellow chalk on their faces to protect their skin from the sun. If you want to experience authentic Burma, riding the local bus is one of the things to do in Burma. 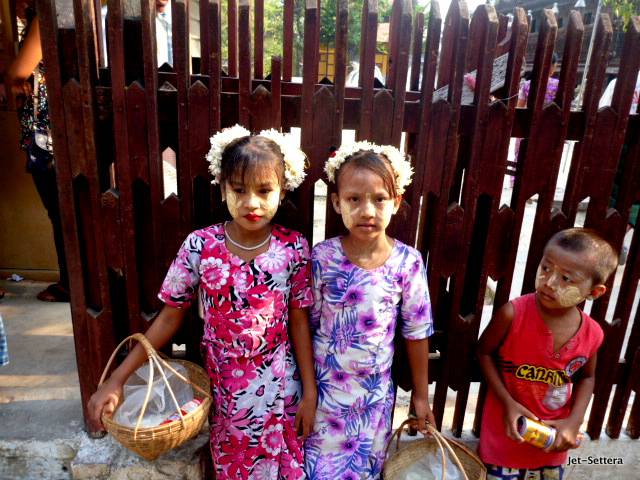 Kids in Myanmar with Sunscreen on Their Faces

All men were chewing tobacco wrapped in a leaf. This made them want to spit all the time. So men were spitting out of the bus window during the whole time. It was pretty gross. I was sweating, I had about 30 mosquito bites on my legs and I was itching everywhere. In the end it took 9 hours for the bus to arrive to Mandalay. We even stopped at a place for lunch. The place was so gross. I said to myself, if I dont get sick from this, I wont get sick from anything. In the end I didnt get sick. I was so happy to get to Mandalay after 9 hours. I couldnt believe that we finally arrived. Mandalay was one of the important Myanmar points of interest.

Then I checked into a Chinese hotel and went to check out the Night Market. The market had all the usual useless stuff that they sell everywhere in Asia, plus much more. I found a dimly lit street, I walked in and I saw that they were selling Viagra, condoms and everything else that they sell in Sex Shops in the Western World. I thought it was very funny that even in a very religious country like Myanmar there is a demand for these stuff. The truth is, sex sells, no matter where you are.

Next day I rented a bike and I biked around to see the city. I was not wondering what to do in Myanmar at this point. I knew there were some Buddhist temples to visit. They were nice but there were so many of them. In the middle of Mandalay was the Royal Palace and it was surrounded by a big lake. It was very pretty. There were many things to do in Mandalay, but mostly visiting temples.

I biked around the lake then I climbed to the top of the Mandalay Hill behind the palace. It was a very nice walk up to the top. There were many many temples on the way to the top. I even saw another disco Buddha. These temples were beautiful places to visit in Myanmar. Visiting the Mandalay Hill was the highlight of the Myanmar tourist attractions. 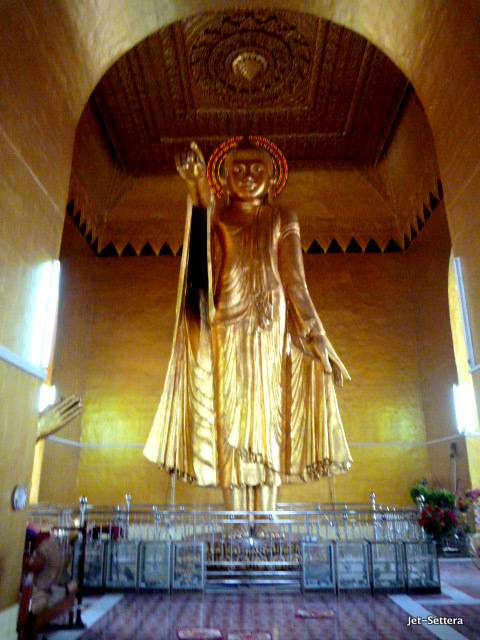 It took me about 45 minutes to get to the top. At the bottom of the mountain, I found a very good fortune teller. He was by far the best fortune teller I have met on this whole trip. He was spot on about many things in my life. It was during the water festival, which was not the best time to visit Myanmar, because everyone was traveling. It was impossible to book a bus ticket or a plane ticket. I ended up taking the train, because I had to get to Yangon to fly back to Bangkok. At night, I took the overnight sleeping train back to Yangon. It was the worst train I have ever seen in my life. I paid $50 for a first class ticket. I couldnt believe how bad the ride was. I shared the compartment with a monk and a woman and her mom. The train was going by 10 miles/ hour and it was a very rocky ride. It took about 16 hours to get to Yangon. It was very hot too and there was no AC. The two women were vomiting out of the window the whole time. I didnt eat anything so I didnt throw up, but I was getting nauseated as well. After I got off the train, I checked into a nice hotel. I had a huge room. It was more like a suite. I was watching CNN in bed for the next 24 hours. I needed to recover from the train ride and enjoy some comfort. I took the plane back to Bangkok the next day. Overall Myanmar was a nice experience, but  travel to Burma and travel in Myanmar can be pretty rough. 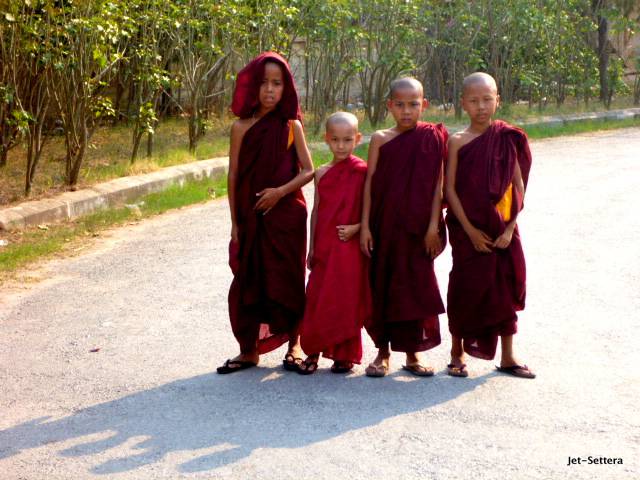 Kids in Myanmar in Monk Outfit – Things To Do In Yangon 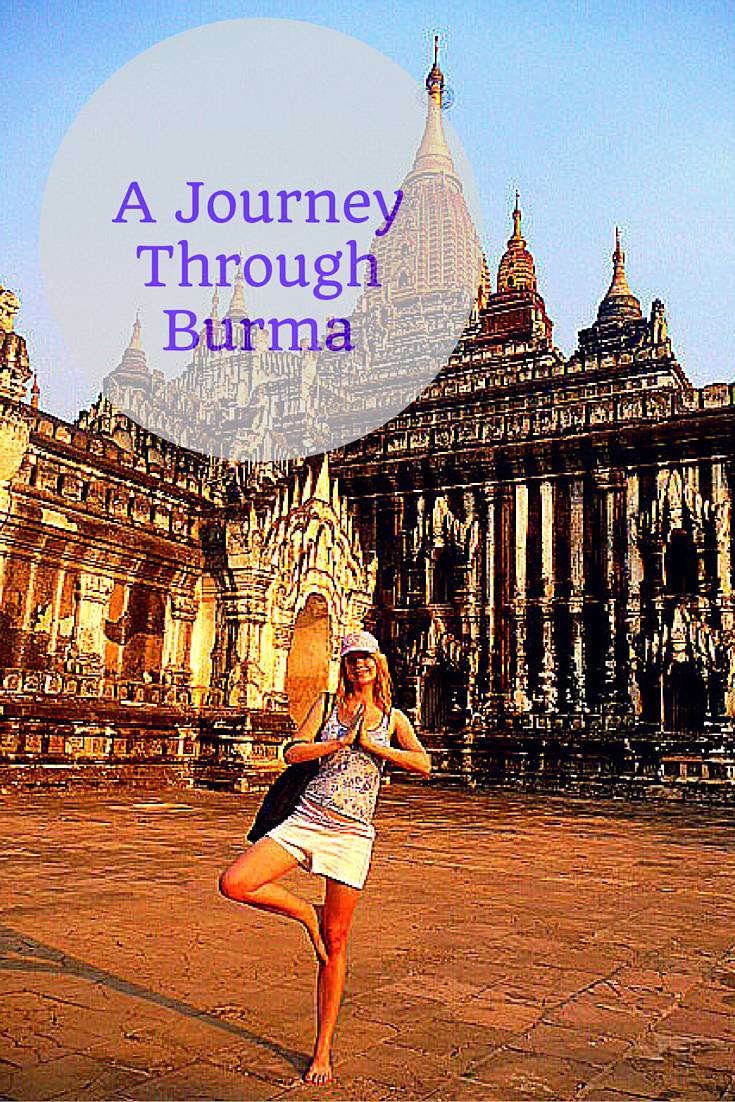